#EUDebatesCafe: A small country with a big heart – Moldova’s response to the refugee crisis The Institute for European Policies and Reforms (IPRE) in cooperation with the Hanns Seidel Foundation in the Republic of Moldova and in partnership with the Privesc.Eu and Rlive.md, organized on Thursday, March 24, 2022,  the second online public debate of this year in the #EUDebatesCafe format, with the theme: “A small country with a big heart – Moldova’s response to the refugee crisis”. The debate was also organised as part of the civic campaign #StopWar and in support of the #MoldovaForPace campaign.

The guests at the event, which was moderated by Iulian Groza, Executive Director #IPRE, discussed with the main national and international actors the scale and the effort in the management of the refugee crisis in the Republic of Moldova. Speakers also referred to the main challenges and solutions identified by the national authorities, international organizations, volunteers, private initiatives, and civil society to respond to the immediate and medium-term needs of refugees. Participants also outlined recommendations of measures to optimize and increase the efficiency in coordinating the efforts of national and international actors in managing the refugee crisis.

Below, we propose some of the key remarks of the speakers. Ana Revenco, Minister of Internal Affairs: “From day one we found ourselves in the epicenter of a phenomenon that we definitely thought we would be able to manage head-to-tail, because all the estimates showed that a flow of up to 100 thousand refugees who will enter the Republic of Moldova awaits us. I can tell you that in the first four days alone, the figure of 100 thousand refugees who entered the country was reached, and from here the real intensive work started. All the structures of the Ministry of Internal Affairs had to adjust their interventions on the fly in order to cope with the situation. We are the ones on the front line and our competences include facilitating the crossing of the border, assigning legal status, accommodation for a short period of time, triage, etc. In total, until now, the Moldo-Ukrainian border was crossed by over 330 thousand refugees, and about 100 thousand remain on the territory of the Republic of Moldova. The majority of those refugees are women, and about 50% are children. Such a crisis has not existed in the history of the country. I was glad to see that in such situations, I had colleagues, who came up with concrete ideas of actions, among which the activation of several entry points or the opening of corridors for children. For the refugees, facilitated conditions for entry into the country have been created. The large number of refugees is also a challenge for law enforcement that ensures security and public order, but also for those who pursue road safety, because the number of transport units has exceeded several thousand.” Francesca Bonelli, UNHCR Representative in the Republic of Moldova: “I arrived in Moldova  20 days ago as part of an emergency mission in response to the refugee crisis. I have 25 years of experience in this area, but this is the first time that I have seen such a commitment from the authorities and the population, who welcome refugees with such great openness. At first we came here with a team of only three people, and in a month we are 65. The UNHCR’s commitment is to support the Government in managing the crisis and  to provide protection to refugees. The first step of an emergency response begins at the border, and the UNHCR’s work in this regard is to work with the border police, support the accommodation centers for refugees in Chisinau and other regions, but also to facilitate the movement of refugees from the border to Romania. Moldova was a leader in the international community in terms of response, and this showed the solidarity of this people. We are here to make this solidarity more visible, but also to continue to respond to the needs of refugees.” 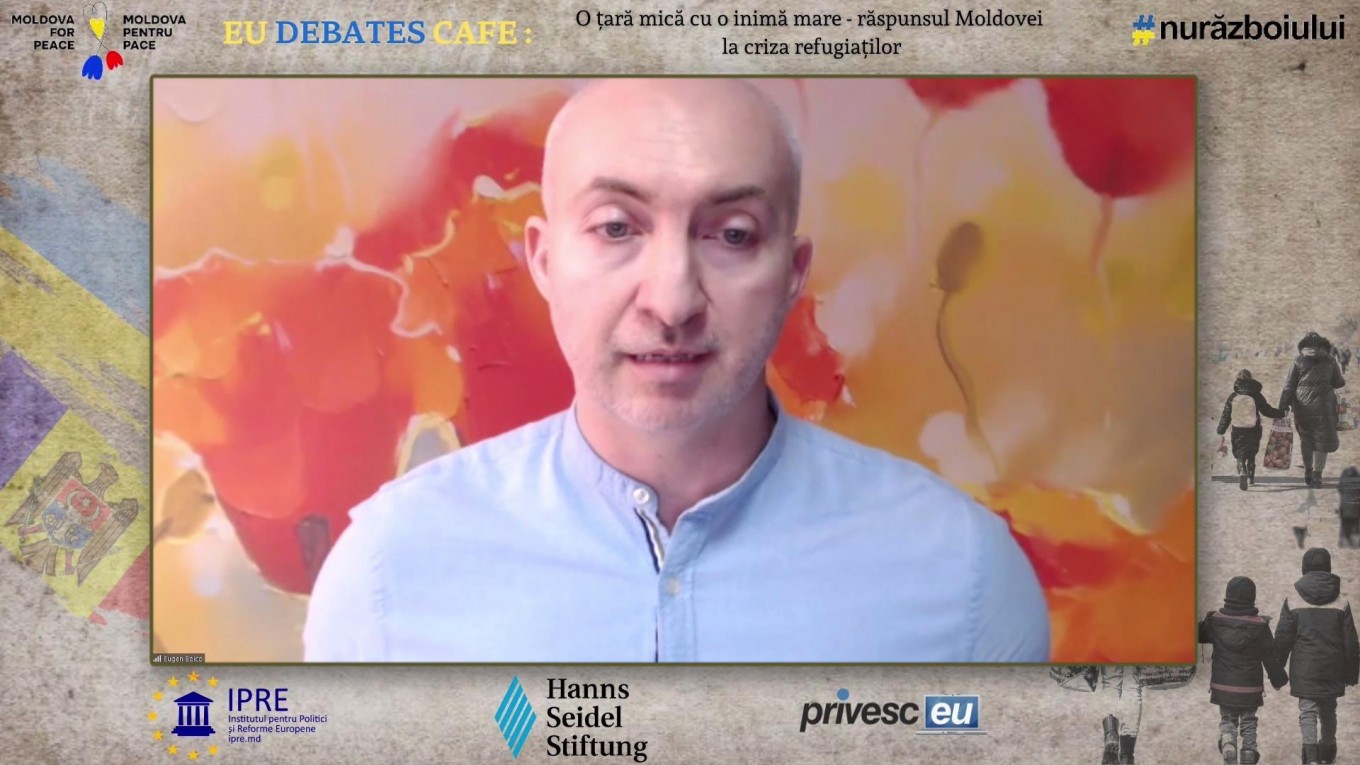 Eugen Boico, founder of Publicis, member of the board of “COR” Association of Creative Industry Companies, Representative of the campaign #MoldovaForPace: “Right from the beginning of the project design of the campaign #MoldovaPentruPace we have set ourselves two very concrete objectives, namely – to stimulate and encourage unity and, secondly, to make efforts to fight fakes. Thus, a 14-page document was drafted, which was distributed in our creative community and in which the objectives were set very clearly. Then the message “Moldova for Peace” crystallized, because this is an equivocal message, which you cannot discuss or debate. It’s a truth that we all believe in, no matter how we see the conflict. Subsequently, another document was drafted, which had several concepts or messages, which was sent to the Government and approved. Based on this material, the graphic element was chosen, which oscillates around the idea of Martisor, and we wanted a message that cannot be a negative one. The campaign was launched on March 1st during the “Martisor” festival, but also on Maia Sandu’s page, and the message of unity was massively taken over.  At the same time, I want to say, that the beauty that we discovered in this campaign – “A small country with a big heart” – must be galvanized in the identity of our country, not with the opportunistic purpose, but to remind us of who we are and what we can do.” Vitalie Sprinceană, member of the volunteering initiative “Moldova for Peace”:  “We are a group of activists, volunteers, people without commitment to civil society.  A large part of the people of the initiative have  already had a volunteering experience, from 2020-2021, following the COVID-19 crisis. That’s when we put together some models of interaction, communication and learned some elements like  fundraising or product management. We decided very quickly along the way to divide ourselves into different departments, which would manage different areas. One department deals with goods, others with transportation, another department collects funds, another manages several thousand volunteers. It was a colossal effort, both at the beginning and now. At first there were problems with the transportation of refugees. Gradually, international organisations for refugees have been involved, which can share their much-needed and useful experience. In the last four days, the flow of refugees has diminished. And this could be a respite in which the structures involved prepare for wave two or three.” 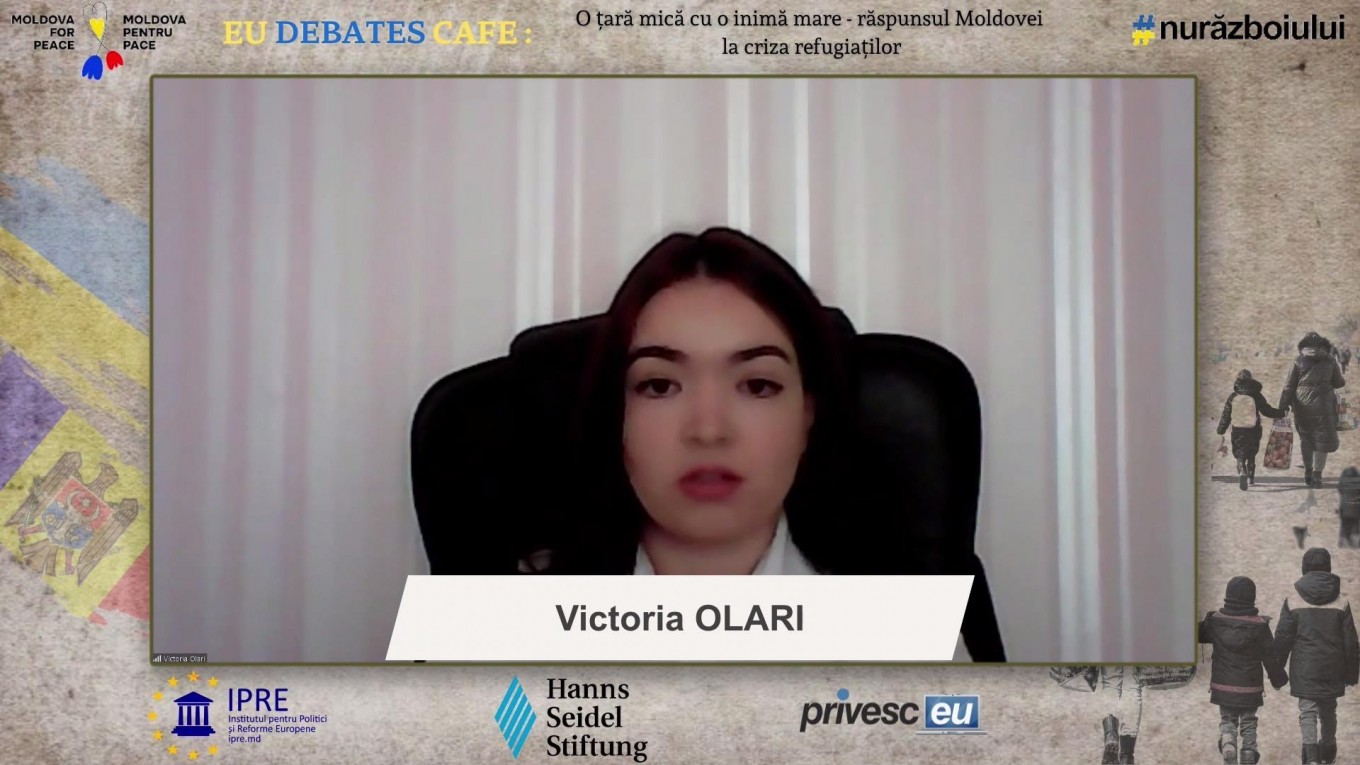 Victoria Olari, project coordinator, Institute for Strategic Initiatives: “The response to the refugee crisis is a maturity exam for Moldova. The mobilization of the authorities and the population is the best example of this. e humanitarian crisis has hit the entire continent, and the Republic of Moldova has taken upon itself the highest number of refugees relative to the country’s population. The crisis caught Moldova with an economy that was barely recovering from COVID-19 and the energy one. Even so, both the state and the citizens have found forces to mobilize. The authorities must think about measures to integrate refugees if they decide to stay here in the Republic of Moldova. To make efforts on the education side. Employment, the acquisition of financial independence by refugees would remove the pressure from the social system. At the same time, there are also problems that can affect the Republic of Moldova, such as the evolution of prices on the real estate market, to which we must find solutions and adapt in time, to work in a unitary manner, because  the problems will not end in a month or two.” Elena Madan, Director of “Terre des hommes” in the Republic of Moldova: “We, as an organization that defends children’s rights, were present right from the first week. In partnership with UNICEF, we opened the first blue dot, within the refugee transit center in Moldexpo. This center is a space for children and family, which provides a complex of services. It is a safe space for children, where psychosocial activities are done for them. Children are supervised to allow families to rest after the long journey they have taken, to be able to handle documents and procedures, but also to be able to think about  their plans for the future. During this time we have had both good results and challenges.” 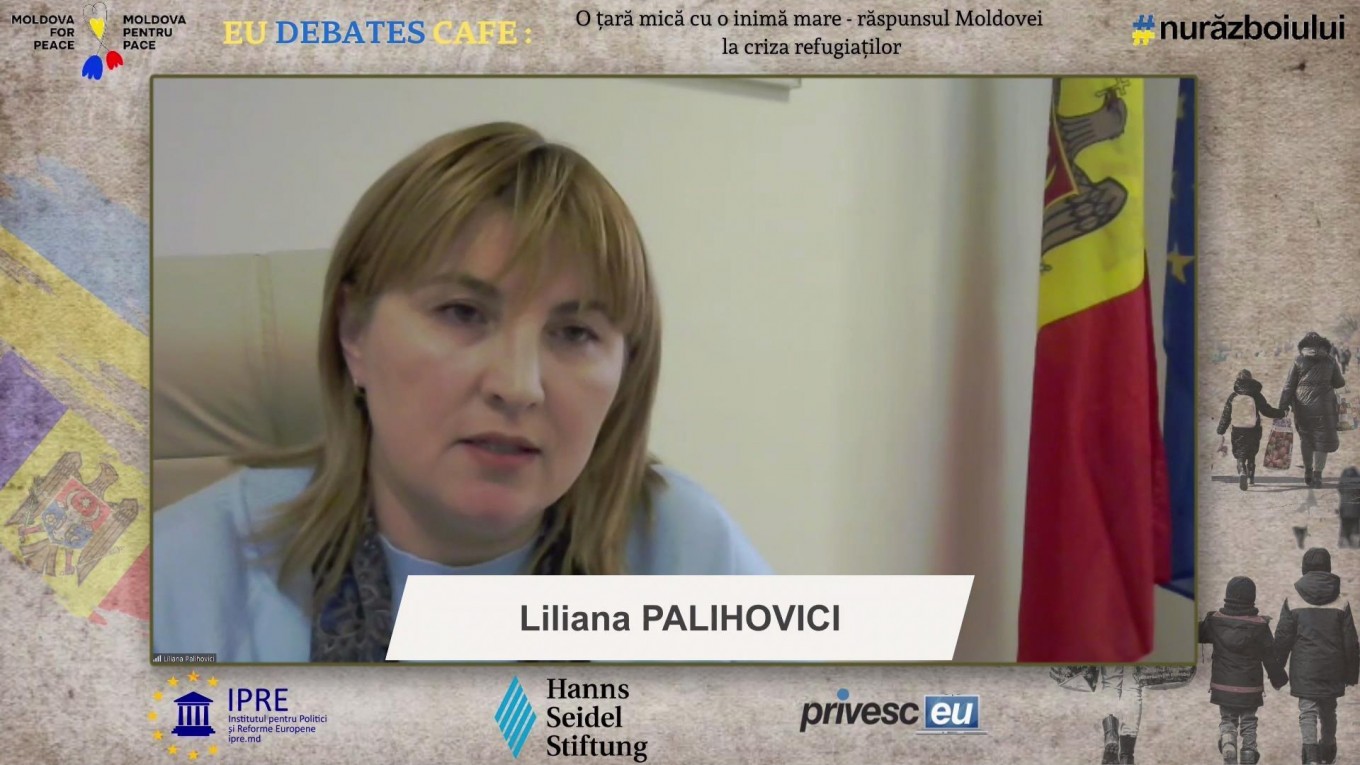 Liliana Palihovici, Chairwoman of the “Institutum Virtutes Civilis”: “This war in Ukraine has allowed us to test how strong our social cohesion, solidarity is and I believe that the population of the Republic of Moldova passes this test with dignity. We, as an organization, when we found that our country is going through such a situation, we came up with a support, both with voluntary work of the team and with a series of actions to support the family, women with children. We offered both food, hygienic packages and created spaces in the temporary accommodation centers. This support is needed not only by those in these centres, but also by the need to create support mechanisms for those families who have agreed to host refugees. Thus, we continue to identify international partners to provide all the necessary assistance, both in terms of food or hygiene products, as well as for the families hosting refugees. We plan to work with four districts (Ialoveni, Straseni, Rezina and Falesti), where we will continue to provide assistance. I want to appreciate the effort that the volunteers from the Republic of Moldova have made and are making, and all the appreciation that comes for them comes not only from me, but from different corners of the world. My exhortation to all is that we continue to be people with great hearts, for this leads to the establishment of peace.” Vitalie Esanu, founder of Evisoft, Privesc.eu, Soogragio: “In the first days, a lot of people called me to help them with the information systems. Thus, on March 1st, we launched the uahelp.md website, which is managed by the Government, and since then we have added many modules, starting with 112, after that the registration of refugees, placement centers and their needs that can be said online. From the centers, from these needs, orders are created to the warehouse, in real time. Then these orders are taken to the placement centers, then the orders close, and this whole fall-tail process is fully automated in a certain system, which already hundreds of people are working day by day.  Shortly after, we decided to make another site, another system, a kind of 112, much more modern, modern in terms of information technologies. It’s all about the site is https://dopomoha.md/, which is made for volunteers to help refugees. In the end, we were able to tie the 112 system, the “green line” and take all the cases to the volunteers. There are a few filters, when the larger groups take over the Government, and the smaller ones are taken over by the volunteers.”

For more details, you can watch the video of the event on the privesc.eu here and on Reality Live here. 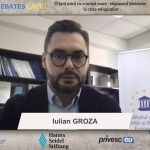 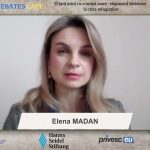