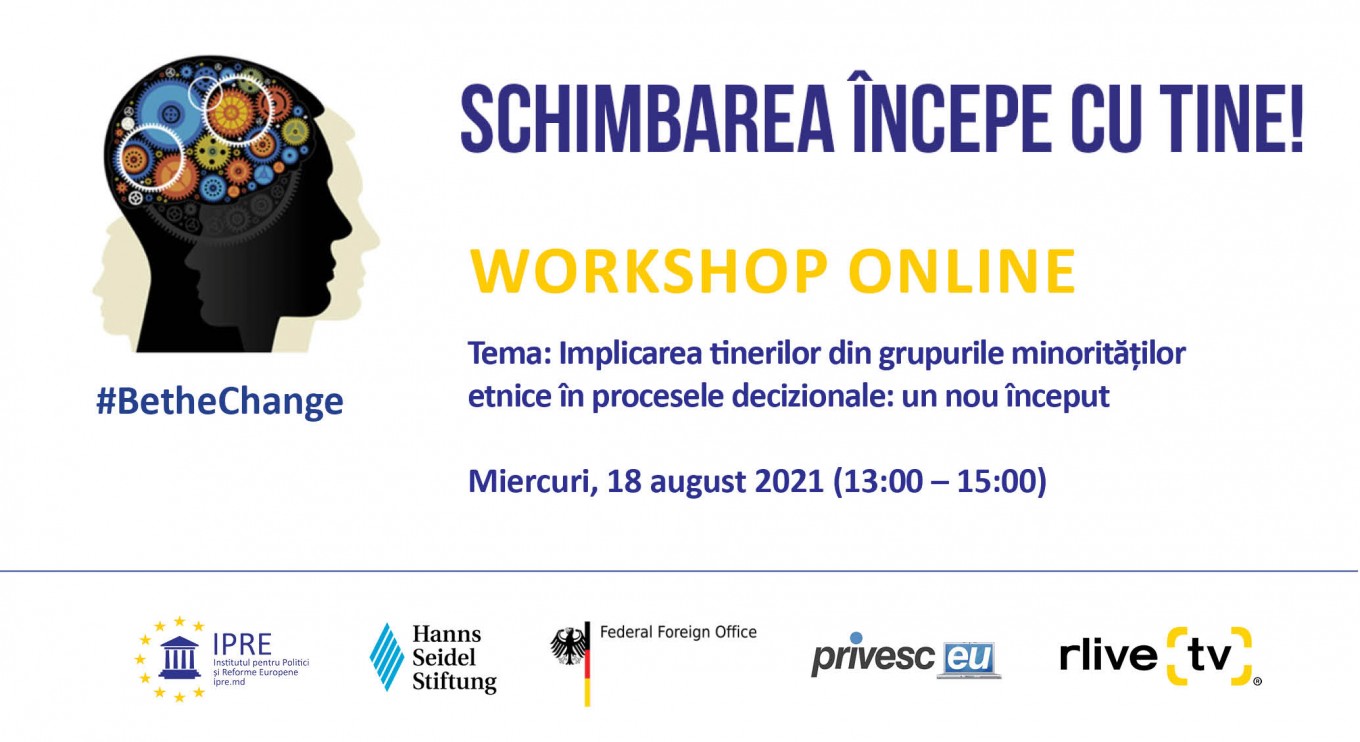 On Wednesday, August 18, 2021, the Institute for European Policies and Reforms (IPRE) with the support of the Hanns Seidel Foundation and in partnership with Privesc.Eu and Realitatea TV, organized the third event of the initiative„BetheChange: Youth for the Europeanization process of the Republic of Moldova” on the involvement of young people from ethnic minority groups in decision-making processes. The event was organized by the participants of the #InternshipIPRE2021 and #YoungFellowsIPRE2021 programs.

The speakers of this event, moderated by Valeriu Turcanu, Justice and Rule of Law program intern, discussed about the obstacles that exist both within the ethnic communities and in the public administration regarding the implementation of the integration policy of the Republic of Moldova, the current situation regarding the involvement of young people from ethnic minority groups in decision-making processes at local and central level, but also about possible solutions to ensure interethnic cohesion mainly by involving young people from ethnic minority groups.

Sergiu Conovalu, National Program Coordinator at the Office of the High Commissioner on National Minorities (HCNM): “Moldova has an ethnically and linguistically diverse society. This diversity must be valued by the members of the society themselves and managed effectively by the authorities. Participation in public life is one of the four priority areas of the Strategy for strengthening interethnic relations in the Republic of Moldova for the years 2017-2027. The Office of the High Commissioner on National Minorities grants a great importance to this area, as well as to the effective participation of ethnic communities in public life as this is an essential component of a peaceful and democratic society. In a society it is important that every citizen has the opportunity to integrate and participate fully in public life. This strengthens the sense of belonging. Otherwise, the lack of participation will lead to the marginalization and exclusion of certain categories of citizens from decision-making processes. In particular, young people should be encouraged to participate, in addition to their rights, through synergy and the combined collaboration of decision-makers. Young people need to be truly involved in these processes.”

Nicolai Cheles, President of the National Youth Council of Moldova: “Since 2016, a network of young activists in the field of national, ethnic and religious rights has been operating in the Republic of Moldova. In this sense, the activity of the members of these communities has focused in recent years on the protection of human rights. Thus, young people from ethnic communities come up with recommendations for public institutions. They have also developed and submitted numerous shadow reports on topics of interest, such as the elimination of racial discrimination. In this way, young people are encouraged and feel empowered to participate in both national and international consultative processes. The Republic of Moldova should ratify the European Charter for Regional or Minority Languages ​​in order to ensure full circulation and widespread learning of these languages ​​in society”.

Valeria Lembas, National School of Political and Administrative Studies, SNSPA (Romania): “Albeit a multicultural society, regretfully, ethnic minorities in the Republic of Moldova face a series of abuses, discrimination, violations of rights and freedoms. Moreover, the voice of young people is not heard and their representation in state institutions is lacking. We cannot speak of a prosperous and healthy society if we are not open to ethnic minorities, if we do not embrace diversity in all its forms and if the minority rights are not guaranteed. It is essential that we use the media to encourage a change in perception on ethnic minority communities. Moreover, it is important to support research projects that would analyze the problems of ethnic minorities and would help to identify viable solutions. At the same time, all of us ought to contribute to the integration of ethnic minorities into the wider community.”

Alexandr Burdian, National School of Political and Administrative Studies of Romania: – “This specific situation in the Republic of Moldova has multiple political and social implications in the process of integrating diverse societies into a common, inclusive and non-discriminatory one. The fundamental part of this process is the respect and protection of human rights. In addition, the process involves multiple principles that must be respected in a state with ethnic and linguistic diversity. For example, the supremacy of voluntary self-identification, non-discrimination, a sense of civic belonging to the Republic of Moldova, unity in diversity and other. International standards help create a diverse and united society. The Framework Convention for the Protection of National Minorities ensures that a society can be built where all people can fully enjoy their rights and every individual can create value in the community. The Ljubljana Guidelines on Integration of Diverse Societies also suggest that the state should create certain conditions to ensure the effective participation of national minorities. Not only do these recommendations guarantee the national minorities’ legal rights to participation, but also the encouragement to participate – that must come from the state.”

The video recording of the event is available here: www.privesc.eu and www.rlive.md .