The Institute for European Policies and Reforms organised yesterday, 28 June 2017, a workshop where the role of civil society in reducing corruption risks and the importance of the transparency of the public sector with particular emphasis on public procurement were discussed.

During the event attended by the representatives of civil society, public institutions, including from the justice sector, as well as academia, the conclusions of two policy documents developed by IPRE experts in cooperation with the Estonian colleagues were presented.

During the first half of the workshop, Iulian Rusu, IPRE expert, reviewed the preconditions for strengthening the role of civil society in the prevention and fight against corruption in Moldova, among which the review of integrity of persons holding public functions, the scrutiny over the income and expenditures of political parties, the efficient use of public funds, as well as delivery of public services.

„Access to data held by public authorities and institutions is frequently restricted due to the abusive application of the law on personal data protection or due to discouraging fees applicable when accessing public registries. Also, the financial entries and expenditures of political parties come from multiple sources with a high risk of discredit for the later, whilst the party financing legislative framework is very permissive. After reviewing these aspects, we have reached the conclusion that Moldova could take over a series of good practices from Estonia, such as: digitisation of population, access to public databases held by public authorities and institutions, interoperability of databases and the thorough verification of the income and expenditures of political parties” concluded Iulian Rusu.

From her part, Aive Pevkur, expert from Transparency International Estonia, spoke about the reduction of corruption risks and the pressure which civil society must exercise on the authorities. „In Estonia, political parties are financed from the state budget. It is good that they are monitored, which allows us to know from where the money comes. A second element is linked to the watchdog role of the civil society”. In Estonia we created a series of public monitoring platforms. For instance, just last week a on-line platform on salaries and public funds was launched. This project was possible with the involvement of the Ministry of Finance from Estonia, whilst the cooperation between civil society and the state bodies was a fruitful one. Thus, the journalists, even citizen, can quickly see who and how much is receiving. Another aspect is the level of perception of corruption. It should be an accelerator for society and it can change when the fight against corruption becomes functional”, mentioned Ms. Pevkur.

In the second part of the event, Adrian Ermurachi presented a draft policy paper, which reviewed the best practices in fighting corruption in the area of public procurement, which could be implemented in Moldova.

Also, Triin Paljak, the representative of the Ministry of Finance of Estonia, talked about the corruption risks in the public procurement sector and the access to open data, was well as about the E-solution platforms from her country. „In 2016 the costs of public procurement in Estonia were 2 billion Euros, whilst 90% of these funds were contracted electronically by private companies. It was a transparent process, which, due to the electronic system, allowed anyone see who participated and to monitor each process. We want to increase this rate of electronic participation in public procurement to 100% until 2018. It is a new process, but which offered results and could be a good example for Moldova”, mentioned Ms. Triin Paljak.

After the discussions during the workshop, IPRE experts will improve the public policy documents, which shall be subsequently shared with the representatives of civil society and competent bodies.

The public debate may be viewed here.

Also, below, the public policy documents developed by IPRE may be consulted.

The workshop was delivered within the Project ”Strengthening the role of civil society in fighting corruption in Moldova”, supported by the grant offered by the Ministry of Foreign Affairs of the Republic of Estonia and implemented with Transparency International Estonia. 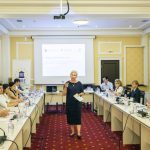 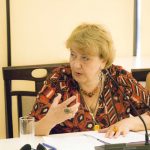