Home - Multimedia, Press Releases - (VIDEO) The results of the project “Policy Bridges with the EU: Securing the Europeanization process of the Republic of Moldova”

(VIDEO) The results of the project “Policy Bridges with the EU: Securing the Europeanization process of the Republic of Moldova” 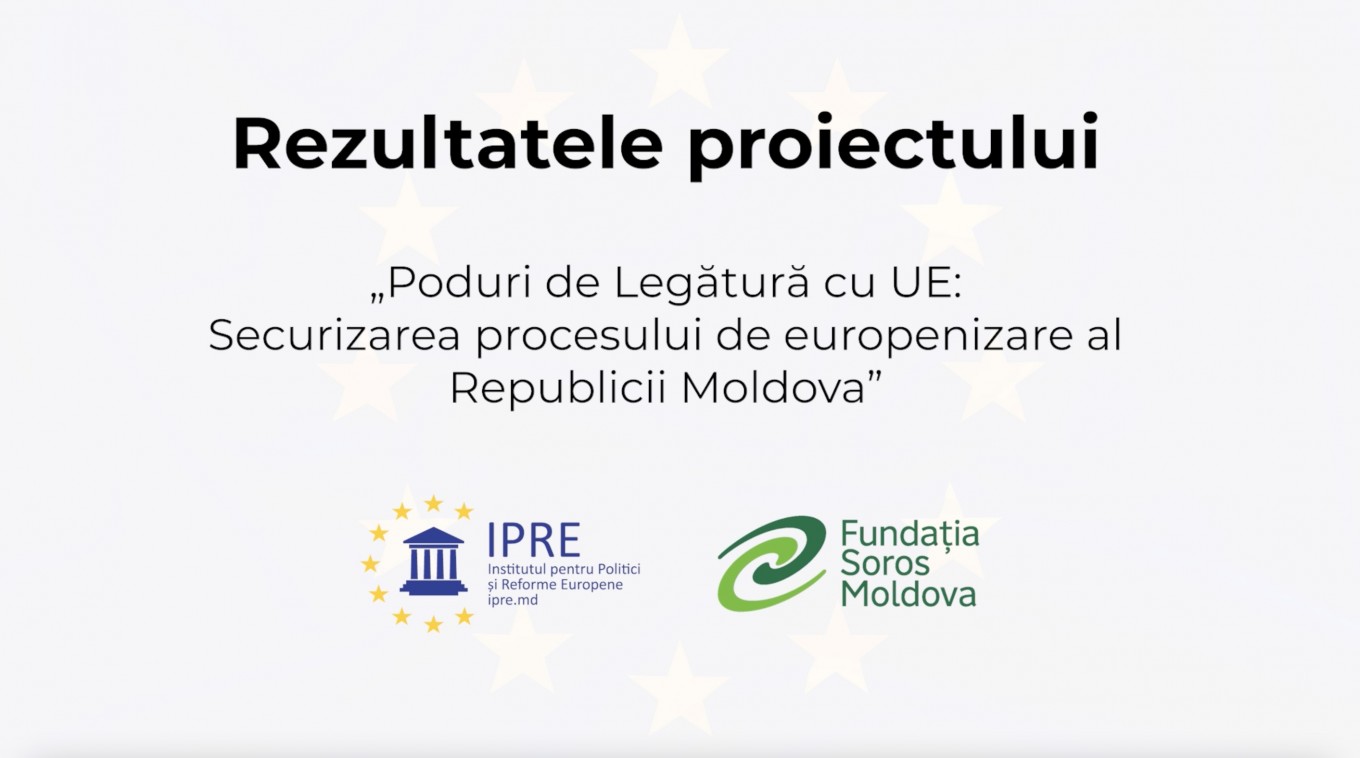 Between March 2020 and July 2022, the Institute for European Policies and Reforms, with the support of the Soros-Moldova Foundation, implemented the project “Policy bridges with the EU: Securing the Europeanization process of the Republic of Moldova”.

The main conclusions and recommendations were discussed during nine policy dialogues with the participation of public authorities, civil society and think tanks. IPRE’s recommendations were reflected in several key documents approved at the national and European level, including the priorities for the future of the Eastern Partnership after 2020, the vision of the foreign policy priorities of the Republic of Moldova for the years 2022-2023 and the concept of the internet voting system “e-voting”.

In order to bring closer to the general public and to explain in a simple way the main topics addressed in the project, we have developed nine editorials, distributed in the national and international media and published in three languages: Romanian, Russian and English. At the same time, we developed nine explanatory videos, through which we tried to briefly and clearly present our vision regarding the reform process aimed at implementing the Association Agreement with the European Union.

In the context of the launch of the military aggression of the Russian Federation against Ukraine, we produced four podcasts with national and international experts, aimed at covering the most important repercussions of the war at the national and regional level.

In the last year, IPRE experts organized advocacy visits in six European capitals and cities: Kyiv, Vilnius, Hague, Brussels, Berlin and Bucharest, through which we managed to advance the dialogue with representatives of national authorities, European institutions and research centers, directly responsible and interested in the European integration dossier of Moldova.

Furthermore, IPRE managed to develop cooperation agreements and establish sustainable partnerships with several research centers at the regional and European level, including Chatham House, the Euro-Atlantic Center for Resilience in Bucharest and the Cligendael Institute from Hague.

The results of the project were presented during the conference “Policy Bridges EU – Moldova: New milestones for Moldova’s EU membership perspective”, which took place in May 2022 as part of the visit of a group of researchers affiliated to Chatham House in Moldova.

This video material was developed within the project “Policy bridges with the EU: Securing the Europeanization process of the Republic of Moldova”, implemented with the support of the Soros Foundation Moldova.