The Institute for European Policies and Reforms, in partnership with Chatham House, organized a study visit for a group of international researchers from 10 to 12 May 2022. The purpose of the event was to provide a better understanding of Moldova’s progress and constraints  in the context of submitting the application for accession to the EU, but also to discuss the impact of the war in Ukraine on the Eastern Partnership countries.

During the first day of the study visit, took place the conference “EU – Moldova Policy Bridges: New milestones towards EU membership perspective”, which focused on the analysis of EU – Moldova relations in the context of the implementation of the Association Agreement and the process of assessing the application for accession to the EU.

On the second day of the study visit, Chatham House fellows, as well as experts from the Republic of Moldova and representatives of public authorities, participated at the conference “Impact of Russia’s War in Ukraine on the Eastern Partnership countries “. The event provided a platform for discussing the influence of Russia’s War in Ukraine on the political, economic and security issues of Moldova and the Eastern Partnership states.

Furthermore, a series of meetings were organized with Natalia Gavrilță, Prime Minister of Moldova, Mihai Popsoi, Deputy Speaker of the Parliament of Moldova, as well as members of the Commission for Foreign Policy and European Integration of the Parliament. During the meetings, participants exchanged views on internal reform process and foreign policy priorities, aimed at accelerating the European integration of Moldova.

The study visit was organized by the Institute for European Policies and Reforms, in partnership and with the support offered by Chatham House and the Robert Bosch Foundation, as well as as part of the project “Policy Bridges with the EU: Securing the Europeanization Process of the Republic of Moldova”, implemented with the support of the Soros Foundation Moldova. 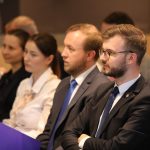