EU Debates Cafe: Reform of the Electoral Code: Priorities and Areas of Intervention 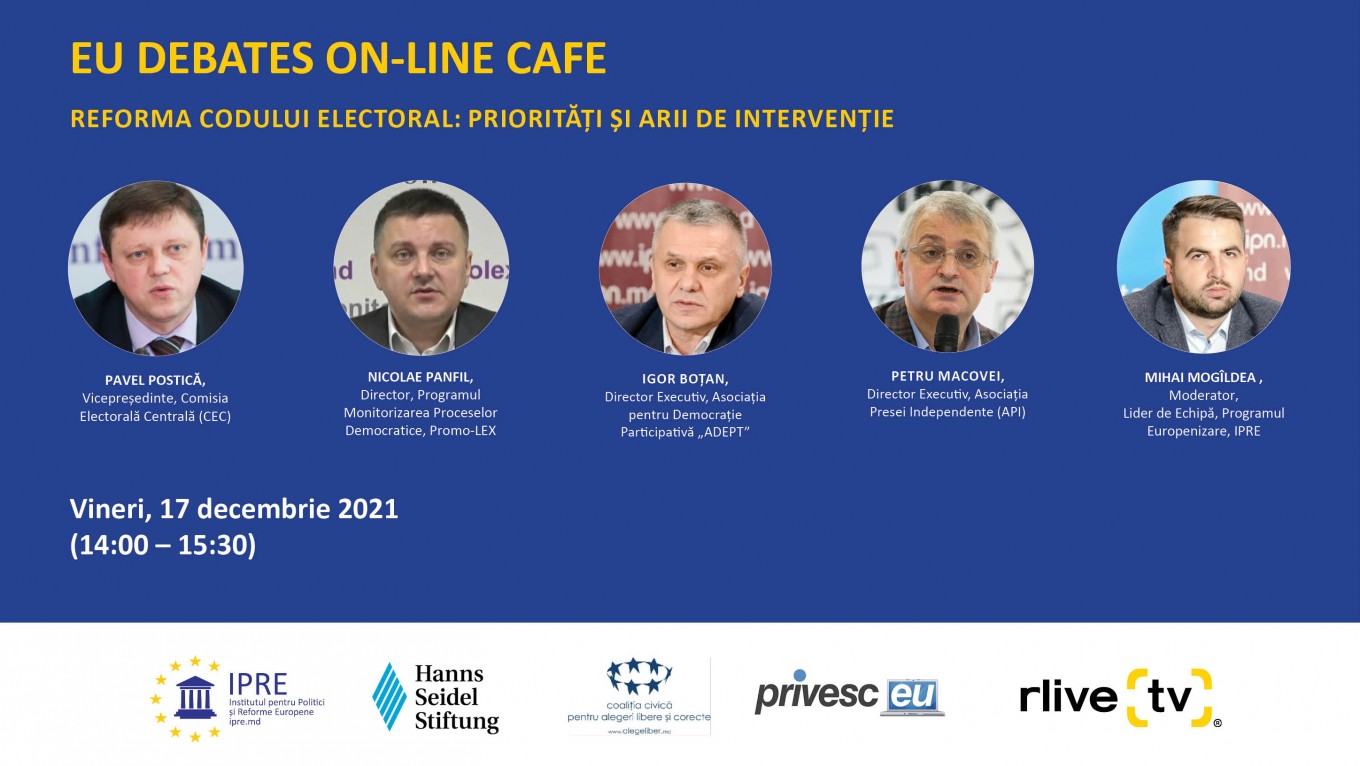 The Institute for European Policy and Reform (IPRE), in partnership with the Civic Coalition for Free and Fair Elections (CALC) and with the support of the Hanns Seidel Foundation, organized the 11th EU Debates Café Online Public Debate, which took place on Friday, December 17th, 2021, dedicated to the priorities and areas of intervention for the reform of the Electoral Code.

The guests of the event, which was moderated by Mihai Mogildea, Team Leader, Europeanization Program, IPRE, discussed the main reform directions of the Electoral Code, starting from the priority areas of intervention and the problems identified in the previous elections.

Here are some of the keynote speeches:

Pavel Postică, Vice-President, Central Electoral Commission (CEC): “The Central Electoral Commission has set up a small working group to prepare a draft amendment to the Electoral Code. We must admit that the public commitments assumed by us have not been finalized in the internal terms that we have established, due to the new local elections in Bălți municipality and 14 other localities. But we have moved significantly forward on certain chapters that have been worked on anyway. At the end of January 2022, we intend to approve this bill in the CEC and to make it public for all interested parties. I believe that if this technical project is successfully discussed during February-March 2022, and in April it is accepted and promoted by an actor who has the right of legislative initiative and is registered in Parliament, then there is the possibility of voted in first reading in early May. Thus, I believe that after all the procedures this bill should be adopted one year before the next elections. If we talk conceptually, then the initiative implicitly aims to change the composition, mandate, structure and procedure of appointment of the Central Electoral Commission, but also the permanence of the electoral bodies, at least of the second level. The document will also specify the issues related to the settlement of electoral disputes, as well as the sanctions applied for violating the electoral legislation. The continuous digitization of the electoral process and the implementation of alternative voting methods will also be part of the announced project”.

Nicolae Panfil, Director of the Democratic Processes Monitoring Program, Promo-LEX: “I want to remind you that we also had a draft laq on the agenda, which, if I’m not mistaken, was built on the basis for the current draft law on amending the Electoral Code. It is important to find the best formula, which we can ensure that, on the one hand, the formation mechanism of the CEC corresponds to the needs of today and the functioning of this institution will not be one that acts especially in election campaigns, but which is constantly working to improve electoral processes. Another aspect we have been working on since 2013 is related to the financing of political parties and election campaigns. Here we have several recommendations and I would like to point out that there is already a draft law on toughening penalties for illegal financing. Within this project, we already fould reflected the need we have been talking about for so many years, to take into account administrative resources as an important source that greatly influences the course of elections and to give them an appreciation and to say once that the abuse of administrative resources is a problem. We also need to strengthen the capacity of the CEC and in this regard we have come up with some recommendations on the creation of a department or body within the CEC dedicated to documenting and ensuring the efficient control and supervision of the finances of political parties”.

Petru Macovei, Executive Director, Independent Press Association (API): “Media professionals want the Electoral Code to provide a balance between freedom of expression and the responsibility of all media institutions, not just media service providers. We also want a better collaboration between the CEC and the media, at least at the stage of drafting the Regulation for the coverage of the election campaign, which, moreover, would be desirable to be only one, as not always, in each election campaign, a new regulation should be approved. We want some changes that will solve the existing problems. In the previous election campaigns there were problems related to the electoral debates, respectively it is requested that the Electoral Code include a provision by which the format, frequency and time of broadcasting the debates are established by the media service providers themselves. Now, the obligation to debate only during prime time has proved to be counterproductive. It is also proposed to supplement Article 70 with a provision introducing the notion of “electoral audiovisual programs”. It is proposed to introduce in the Audiovisual Media Services Code tougher sanctions for media service providers that violate the principles of election coverage, from 70 to 100 thousand lei. At the same time, we want to introduce a provision by which the media service providers who do not participate in the coverage of the electoral campaign, but also the public media service providers should not have the right to place paid electoral advertising ”.

Igor Boțan, Executive Director, Association for Participatory Democracy “ADEPT”: “In Moldova, the reform of electoral legislation began in 1997. The new Electoral Code was based on an absolutely conservative approach that foreign experts worked on. This approach has referred to the standardization of procedures, so that different ballots can be held, for example, at the same time, or that staff involved in electoral processes are trained in a certain way and do not need additional training when passes from one election to another. Then, foreign experts pointed out that the procedures established in the 1990, 1994, 1995 elections should be maintained and that innovations in the electoral field should not be resorted to until Moldova gained experience. Many years have passed since then and I believe that this approach must be overcome. At the same time, the formula of setting up the CEC according to the 9-member formula was used, 3 of which are permanently operational, and at that time the explanation was that the financing of the CEC was a big problem. Now these problems are in the past, he said. It is necessary for all CEC members to have permanent status and to specialize in the CEC in certain areas. I think it’s high time we put aside the conservative approach and embrace an innovative approach. “

For more details, you can watch the video recording of the event on Privesc.eu here and on Realitatea Live here.

The event was organized by IPRE, in partnership with the Civic Coalition for Free and Fair Elections, within the project “EU DEBATES CAFÉ: Advancing knowledge and expertise on EU institutions and policies in the Republic of Moldova”, supported by the Hanns Seidel Foundation in the Republic of Moldova and with the financial support of the Federal Ministry for Economic Cooperation and Development.