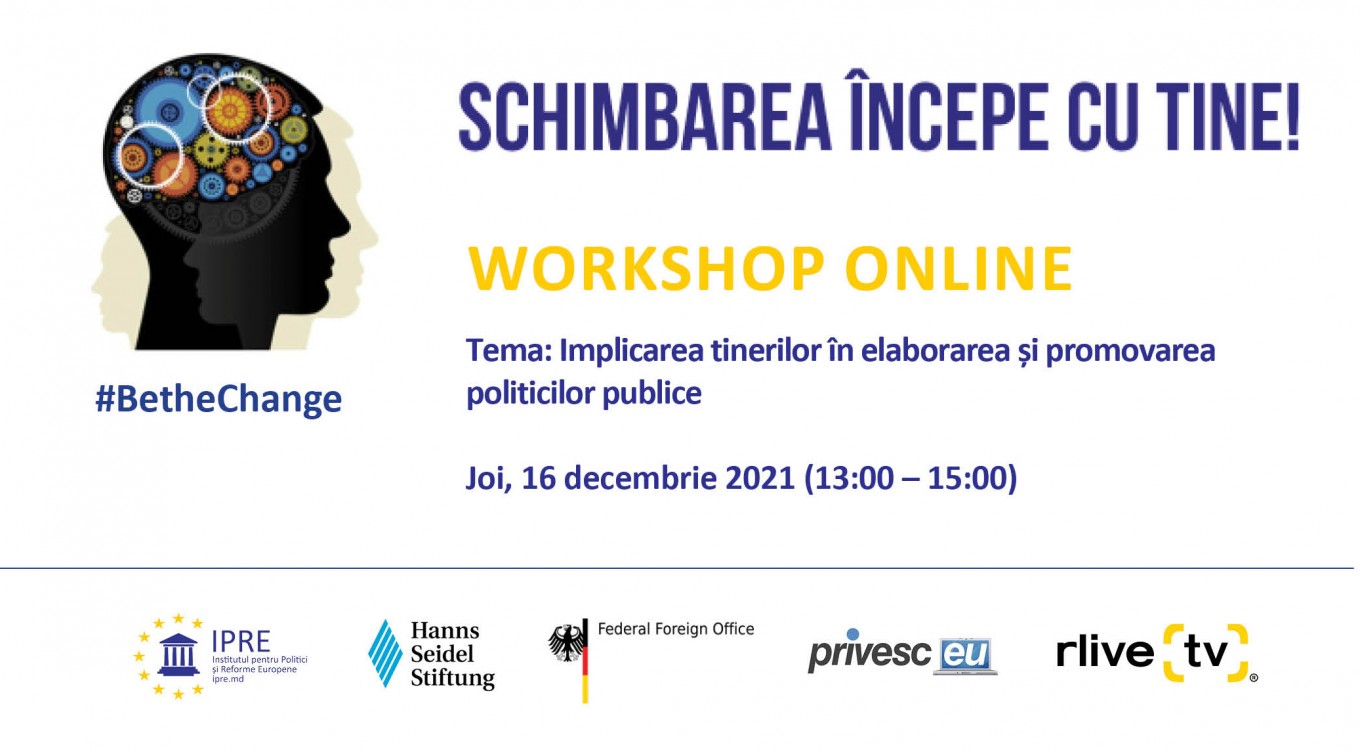 The Institute for European Policies and Reforms (IPRE), with the support of the Hanns Seidel Foundation in the Republic of Moldova and in partnership with Privesc.Eu and Realitatea TV, organised on Thursday, December 16, 2021, the seventh and the last event of this year’s #BeTheChange initiative, dedicated to involving young people in the development and promotion of public policies.

The guests of the event, which was moderated by Elena Bolocan, project assistant at IPRE, talked about the priorities and constraints in public policy making, how public policies can be promoted on the government’s agenda, as well as how to involve young people from Moldova in the process of developing and promoting public policies.

Below are some of the main questions addressed by the participants at the event, as well as experts’ answers.

Mihaela Fedoseev, graduate of the Faculty of European Studies, University of Amsterdam: “As part of the #BetheChange project, before this year’s parliamentary elections, we discussed the topic of youth participation in the elections, including the reasons why some young people choose not to vote. According to studies carried out by CNTM, young people say that although they are socially active, they are often excluded from decision-making processes. For example, young people are usually at the bottom of the electoral lists, with little or no chance of getting into an institution where they can initiate public policy projects, such as the government or parliament. My question is as follows: When a group of young people identify a problem, but they are not part of an institution that initiates public policies, can they get involved in elaborating a public policy project? If so, what steps should they take?”

Response from Adrian Ermurachi, Team Leader, Good Governance and Rule of Law Programme, IPRE, former Deputy Secretary General of the Government 2017-2021: “The key ingredient is engagement and participation. Here we need to understand that to be able to change something or to be able to contribute you need to be part of that process. Otherwise, you will always feel somehow left out and you won’t be able to be the one who can influence a particular decision. And then the answer is as simple as it is complicated: we have to find out how we can be part of that process. Young people are getting involved in politics and that is a very good thing. Of course, it would be good if young people were not in the second part of the lists which is less fortunate, it would be good if young people were at the front, and, in fact, we see in parliament today that we have a number of young people who are very active and are at a quite young age. No matter where you “bake” a public policy you need to get into the scheme that I have presented earlier about promoting public policies. We also need to have a good partner on the other side, and I am referring here to Ministries and other public authorities.”

Emil Burinschi, student at the Central European University, Austria: “During the #BetheChange project, I had the opportunity to develop an analytical note on the topic of Europeanisation processes of the Republic of Moldova within the new context in our country. In order to promote this paper, we conducted, with the support of IPRE, a round table discussion with experts from both Moldova and the EU, as well as representatives from the Ministry. Here I would like to ask you what additional techniques I could refer to in order to promote a public policy document in the future? What are the platforms in our country that we, as young researchers/experts, can address to promote our analytical products but also to contribute to the development of public policies in the country?”

Response from Stanislav Ghilețchi, Public Policy Expert, IPRE: “The techniques we can apply relate to the generation of documents, reports, analytical notes, public policy proposals, all of which are a first step to increase the visibility of a given issue. Organising public events, too, including online and offline is important. An element that I personally used when I worked with the Chisinau City Hall to create a public policy proposal, were the advocacy elements which had to include personal, one-on-one contacts. It is also important to have interviews or smaller meetings with the actors directly involved. It is important to have this human component. We focus on the citizen in the public policy-making process, but it is also important to focus on the people who are the decision-makers. Another important component is to organise ourselves in networks, civil societies, youth groups or local coalitions that show that we are not promoting an individual interest, but a public interest which could allow us to use the public budget in order to solve a problem.”

Response from Stanislav Ghilețchi, Public Policy Expert, IPRE: “In general, the role of academia should be very important in public policy making, in any field. But it is, I think, lacking at all levels. Very few relevant studies are being generated in this area in academia that could allow us to use data in this process of supporting public policymaking. That’s why we need to see how we can boost or reform the processes that takes place in academia so that studies that produce useful value are being generated.”

Response from Adrian Ermurachi, Team Leader, Good Governance and Rule of Law Programme, IPRE, former Deputy Secretary General of the Government 2017-2021: “Perhaps one public policy could actually be based on the question: how do we involve academia more in the public policy making process, and in the regulatory framework in general? Those of you who have already managed to see other models in other countries, you will find that in many developed countries, academia is actually No.1 after the government when it comes to the public policy-making process. And nothing gets implemented in government or parliament until academia has a say. We, unfortunately, are champions in terms of generating legislation and changing it very often, which is oftentimes not analysed, not weighed. In my view, involving academia in this process could prevent these changes, which happen very often.”

For more details, the video recording of the event is available on privesc.eu and on rlive.