2021 Eastern Partnership Summit: Expectations of Youth from the Revival and Advancement Processes of Moldova’s Europeanization 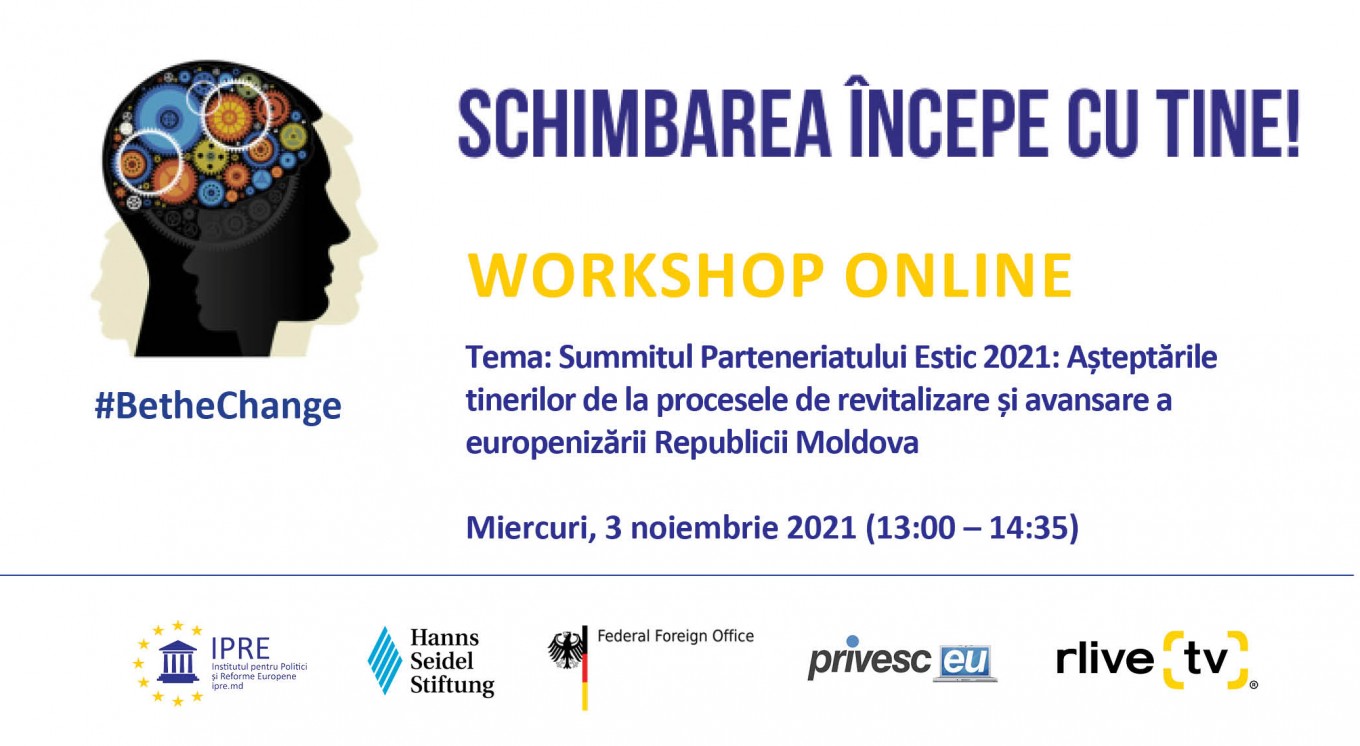 The Institute for European Policies and Reform (IPRE), with the support of the Hanns Seidel Foundation in the Republic of Moldova and in partnership with Privesc.Eu and Realitatea TV, organized on Wednesday, November 3, 2021, the fifth event of the „BeTheChange” initiative, dedicated to youth expectations from the 2021 Eastern Partnership Summit. This event was conceptualized by the participants of the #InternshipIPRE2021 and #YoungFellowsIPRE2021 programs.

Vladimir Cuc, State Secretary, Ministry of Foreign Affairs and European Integration of the Republic of Moldova: „It is a special year for all of us, because we did not have a Summit for the past four years already, the last one took place in 2017. This creates higher expectations for the results of this event. Moreover, we already had a clear agenda for cooperation and deliverables by 2020, and now the entire Eastern Partnership (EaP) community is waiting for the new agenda. The political context in the EaP region, but also in the EU, during this period is quite complicated. Having worked for many years on this dimension, we have realistic expectations of the Summit, because we understand that probably now is not the time for revolutionary political decisions and we understand that in these circumstances, some major decisions will probably be difficult to adopt. Therefore, the emphasis is not so much on the political dimension, but on the part of real and practical cooperation, to bring closer to the EU the countries that desire that”.

Iulian Groza, Executive Director, IPRE: „During an event co-organized by us in Kyiv with the New Europe Center (Kyiv) and colleagues from Georgia, we discussed a lot about the „Associated Trio” format. My understanding is that there is probably a greater intensity of interaction between the non-governmental sector and the research centres between the three countries than we would have liked to exist at the governmental level, for instance. However, I want to point out that this is changing, and we know that this year a Memorandum in the Trio format was signed at Kyiv between the three Ministries of Foreign Affairs. In addition, the Batumi declaration of the presidents of the three countries was signed in the presence of the President of the European Council, Charles Michel. What is important now, when I refer to intensifying government relations, is that we need to learn to work together. Because the EU membership, which we desire, involves a lot of negotiation, compromises, decisions – so there is a greater convergence at European level, and this must also happen at the level of the three countries, because all these three countries have very clear European aspirations”.

Dionis Cenușă, Researcher, Justus-Liebig Giessen University, Germany: „I still believe that the Republic of Moldova must be a realistic player in the relations with the EU. Ambitions are always healthy, but they must be anchored. Even if the Republic of Moldova is going through some extremely important political transformations, which create a cohesion in society around the European vector, we have, in addition to the government, state institutions, national and local public administration, non-governmental institutions. Thus, in addition to those who discuss with the European partners, we have many people who do not participate, but only follow what would be the tangible results that the Republic of Moldova could achieve. That is probably why the tangible results would be the part I would put a lot of emphasis on, as the European partners, who speak about achieving such tangible results for the Moldovan citizens, always mention them. Euroscepticism, which is still a problem in the EU, arises from the fact that we somehow focus mostly on the technical aspects and not so much on the quality of implementation or results that are harmonized with those in the EU”.

Stanislav Secrieru, Senior Associate Analyst, European Institute for Security Studies (EUISS): „It is important to emphasize, first of all, how the 2021 Eastern Partnership Summit will differ from the others. The second important element is to try to anticipate what the priorities of this Summit will be. First, this Summit will take place after four years, and not two years as it would usually be the case. For various reasons we can see that the rhythmicity of the high-level meetings has been lost. It is important that this process is resumed, and it is essential that in the future the rhythm does not exceed two years. Secondly, the Summit will take place in a different composition. For the first time, the United Kingdom will be absent from the discussion table. The relationship with the United Kingdom was important in promoting the agenda within the EU. Therefore, a major player will be missing and practically the EU will be made up of 27 states. The same happens with regard to the Eastern Partnership countries. For the first time, Belarus will not participate in this Summit because it has suspended itself from participating in this initiative. Previously, Belarus was not an active member in the Eastern Partnership. Nowadays, however, relations between Belarus and the EU are at their lowest level in 30 years because of the fraudulent vote in the 2020 presidential election. There have been several waves of repression, with more than 30,000 people arrested and released in the meantime. Since then, there have been 833 political detainees in the country as well. Thus, we must remember that this summit will take place in a 27+5 format and not in a 28+6 one as in 2017.

Anastasia Eșanu, Communications Coordinator, Young European Ambassadors: „Youth expectations from the 2021 Eastern Partnership Summit are very ambitious. First, I think that what we, as young people, would like to achieve the 5 goals that the EU has already proposed for the Eastern Partnership after 2020. That will matter a lot to us, because if we have a resilient and sustainable economy, rule of law, and if we address climate issues, etc.; we will ensure a good enough future so that young people remain in the Eastern Partnership countries, including in the Republic of Moldova.The intellectual exodus persists and respectively what we want is to achieve these goals. If we look at the 2020 document or other years, we see that all these objectives are repeated. In addition, it would be good to find new goals for our development in the next 5 years. We would like to see in the future goals that are more elaborate. Many young specialists require work experience, so job shadowing programs are welcome in the long-term policy goals for the Eastern Partnership after 2020. In addition, a very important aspect is modernization and innovation at all levels of education (incl. school, university). We analysed the priorities of young people at the European level. The top 5 ideas voted by over 1000 EYE 21 participants were: (1) Easier recycling across the European Union; (2) Accountability of companies for their role in climate change; (3) The rule of law; (4) A Federal Europe; (5) United in multilingualism”.

Alexandr Burdian, National School of Political and Administrative Studies (SNSPA), Romania: „The current situation in the Republic of Moldova regarding the inclusive, diverse and equal society dimension, shows, according to studies, that 60% of people aged 18-29 consider that human rights are systematically violated. At the same time, 46.5% of respondents believe that the traditions of a country can justify the limitation of fundamental human rights, of certain social groups. At the same time, a 2015 study shows that there is social distancing gap from several social groups, which aggravates the marginalization of these groups. From the perspective of young people, 45% of respondents believe that the level of equality and non-discrimination of young people is satisfactory and 24% that the level is good. This data should be taken into account when policy makers draw up policies for an inclusive society. Thus, it is very important that these issues be considered in the following discussions in the framework of cooperation in the Eastern Partnership countries”.

The video recording of the event is available on privesc.eu here and on rlive.md here.