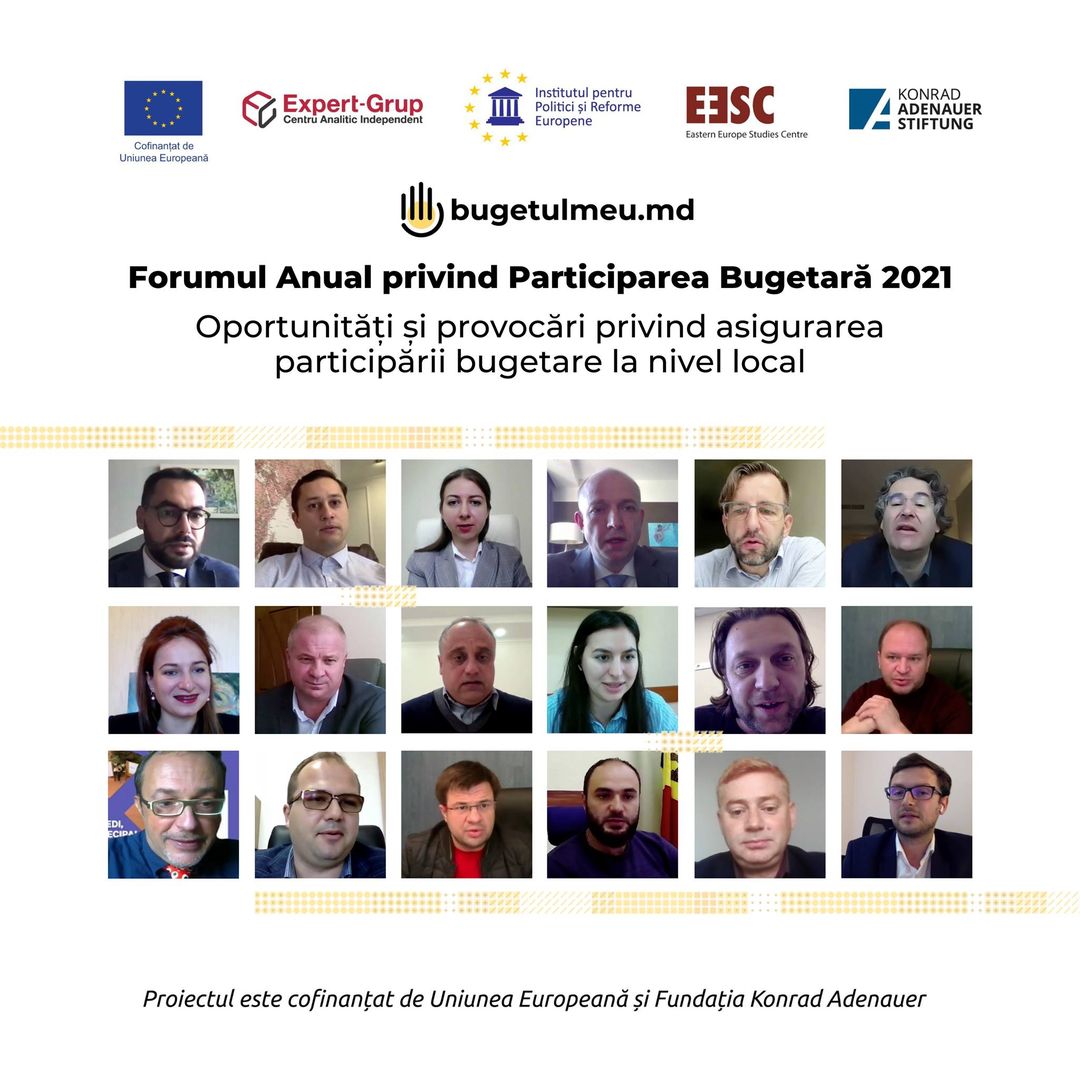 The Independent Analytical Center Expert-Grup in cooperation with the Institute for European Policies and Reforms (IPRE) organised on 8 October 2021 the second Annual Forum for Participatory Budgeting under the project ‘Inform, Empower and Act. Civil Society for Good Budgetary Governance in Moldova’ co-funded by the European Union and Konrad Adenauer Stiftung.

The event, which took place online, focused on discussing opportunities and challenges related to ensuring participatory budgeting at local level, especially during the pandemic. The participants discussed and analysed ideas and practical solutions for overcoming the challenges and for raising the power and quality of civic engagement in budgetary processes at local level.

In her opening remarks, Tatiana Ivanicichina, State Secretary, Ministry of Finance, mentioned the following: ‘I believe that an important outcome of this project is that participatory budgeting is more and more often a topic of discussion. There is much less resistance against it among the stakeholders involved in this process. We believe that even better outcomes can be achieved as we move on. Many more authorities can implement participatory budgeting during the annual budget planning stage and this can be done at central level as well, when the State Budget is being developed. I hope we will be able to ensure a greater participation of civil society and population’.

In his turn, Martin Sieg, Director of the Konrad Adenauer Stiftung Offices in Romania and the Republic of Moldova, stated: ‘Budgetary decision-making must be a transparent process, which includes civil society and other stakeholders. This is essential for good governance and I am happy that experiences of other countries are shared during this Forum, so that we can learn from them’.

‘The EU provides support at national level in the Republic of Moldova to encourage economic recovery, with the economic recovery plan including macro-financial assistance, grants and financial guarantees. Along with this support, the EU places great importance on the involvement of civil society and citizens in these processes. This Forum is another example of such involvement of citizens, in the context when budgetary participation is insufficiently implemented. This is partly due to challenges, but also due to lack of resources and staff, in particular, at the local level. The EU funded ‘Inform, Empower and Act’ project seeks to support these efforts and to encourage civil society organizations to get involved and exchange experiences. The EU supports these initiatives to increase transparency at local level and improve local and economic governance. These efforts are crucial for the capacity of local authorities, as it can act in the best interests of citizens. The EU will continue its efforts to build the capacity of CSOs and authorities, to improve budgetary participation and cooperation between them, for the benefit of the citizens from the Republic of Moldova’, mentioned Gintautas Baranauskas, Deputy Head of Operations, EU Delegation to the Republic of Moldova.

Adrian Lupușor, Executive Director, Independent Think Tank “Expert-Grup”, stated that: ‘Participation of local communities in the budgetary process in the context of the pandemic and restrictions is a very important topic. The pandemic should not affect participatory budgeting processes and democracy as a whole. It is important for people to understand that, regardless of sanitary restrictions, their voice is very important at local level. We saw during the project that most mayors and local stakeholders encountered various issues in this respect, particularly physical distancing and online participation have often been quite problematic. It is clear that the efficiency and the impact of a local budget depend on the voice of people, how it is heard and integrated into the budgetary process’.

Viorel Furdui, Executive Director, Congress of Local Authorities of Moldova: ‘Nobody can deny participation of citizens in decision making at local level. We notice more and more that the communities that learned to work with the citizens stand out and have a different atmosphere in everything related to community management. At the same time, as local authorities get more access to various financing, funds, it becomes imperative that such funds are managed as efficiently as possible, so that we would achieve more at local level’.

Anatolii Topal, Mayor of Ceadîr-Lunga municipality, presented the results of the budgetary process in the town, having mentioned that authorities decided to allocate one million lei for projects submitted by the citizens. In his turn, Ion Cărpineanu, Mayor of Cărpineni commune, Hâncești district, spoke about implementing the ‘My Community’ program in the village with the support of the United States Agency for International Development (USAID), under which over 600 citizens got involved and more than 20 streets had been repaired. Lusina Șestacov, leader of the initiative group, participatory budgeting project in Soroca municipality, mostly spoke about difficulties encountered while communicating with local public authorities during the participatory budgeting process.

Giovanni Allegretti, international expert in participatory budgeting, mentioned: ‘Creating networks is an important aspect related to the promotion of participatory budgeting. For example, we started with one town in Italy and now there are over 230 communities implementing such mechanisms of participatory budgeting. These mechanisms function as a circle, hence the more people take part and get involved, the more will municipalities gain and save for future projects. It is equally important to manage people’s expectations, not to promise them too much and, in case if we succeed, to try to make effort and raise the level of satisfaction’.

‘Participation is very important for strengthening local democracy and municipality development. This changed us, changed the members of my team at the mayoralty and gave us the opportunity to act together with the citizens. That’s because when citizens are your allies, you have nothing to be afraid of. Many politicians fear involvement of citizens, but I know that there is now reason for that and I want to encourage them to not fear citizen involvement. They are not you enemies, they are your allies’, commented José Manuel Ribeiro, Mayor of Valongo city (Portugal).

Dumitru Alaiba, Member of the Parliament, Chairperson of the Parliamentary Commission for Economy, Budget and Finance, said: ‘We, the Parliament, would like to encourage the development of financial tools, such as municipal bonds, because they are real alternatives for Local Public Authorities to mobilise funds to meet certain needs, also being an investment alternative for economic operators and citizens’.

Ion Ceban, Mayor of Chișinău municipality, mentioned that the municipal authorities intend to attract around MDL 65 million on the account of issuing municipal bonds out of the MDL 99 million planned for the purchase of new trolleybuses.

Also, Valeriu Popa, Mayor of Sîngera town, mentioned the following: ‘We are proud, as a community, that the bonds issued by Sîngera Mayoralty, together with the ones issued by Ceadîr-Lunga, are the first ones allowed for trading on the Stock Exchange of the Republic of Moldova. Besides that, the issuance of municipal bonds has two big benefits both for local public authorities and for inhabitants of Sîngera town: first of all we obtained financial resources to fund an infrastructure project (water pipeline) and, secondly, since we talk about budget participation we have citizens getting involved in the implementation of this project’.

Click here to watch the video recording of the Annual Forum for Participatory Budgeting 2021.

‘Inform, Empower, Act. Civil Society for Good Budgetary Governance in Republic of Moldova’ is co-funded by the European Union and the Konrad Adenauer Stiftung. The The project is implemented by the Independent Think Tank ‘Expert-Grup’, as lead partner, in consortium with Konrad Adenauer Stiftung (KAS, Germany), Eastern Europe Studies Centre (EESC, Lithuania) and Institute for European Policies and Reforms (IPRE).