Home - Press Releases - The case of the “neutral” license plates: challenges and perspectives

The case of the “neutral” license plates: challenges and perspectives 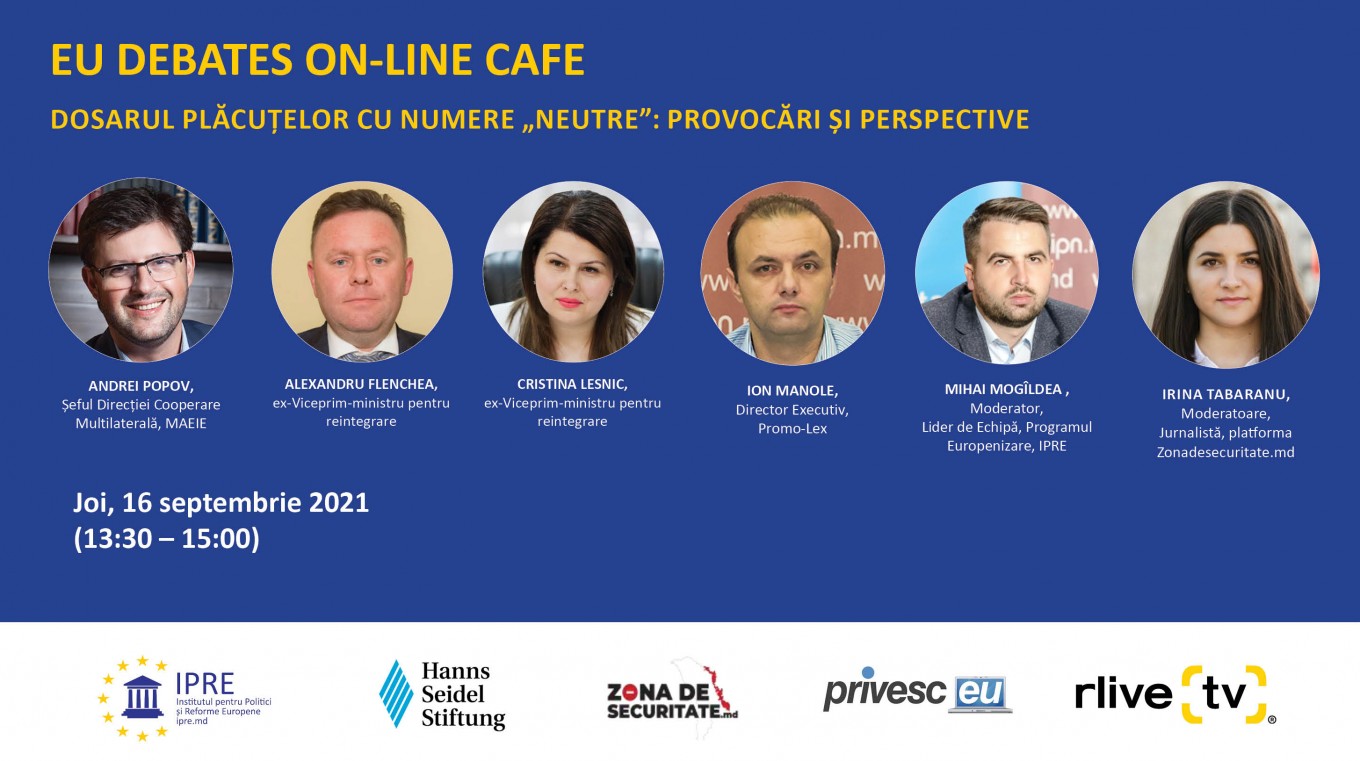 The Institute for European Policies and Reforms (IPRE), with the support of the Hanns Seidel Foundation in the Republic of Moldova, in partnership with the Zonadesecuritate.md platform and in media partnership with Privesc.Eu and Rlive.md, organized on Thursday, September 16, 2021 the 9th online public debate in the format #EUDebatesCafe, dedicated to the case of license plates with “neutral” numbers in the transnistrian region.

The guests of the event, moderated by Mihai Mogîldea, Team Leader, Europeanisation program, IPRE and Irina Tabaranu, journalist, Zonadesecuritate.md platform, discussed about the current challenges related to making the vehicle registration process in the Transnistrian region more efficient in accordance with the national legislation, the current  stage in the dialogue with the officials from Kyiv and the representatives of Tiraspol on this case, as well as its importance for the Republic of Moldova’s reintegration process.

Further, we propose you to read some of the main contributions of the speakers.

Cristina Lesnic, ex-Deputy Prime Minister for reintegration: “Exactly when I was designated as the Vice-Prime Minister for Reintegration, I was assigned this mission. The discussions started in a working group involving both Chișinău and Tiraspol and also the OSCE. There have been a lot of discussions and I do not think there have been cases in history, that in such a short time a mechanism was developed by involving all the participating actors in the process. This solution has been tested for two years, after which it has been extended for another two years and I want to mention that it is a voluntary mechanism. The purpose behind this mechanism is that the citizens of the Republic of Moldova residing on the left bank of the Nistru river can register and circulate freely within the international road traffic. This mechanism was meant for the citizens that carry out non-commercial activities and the need for this mechanism came up as many cars in the region could not have been detected by the MIA employees if they committed violations. It was necessary for these cars to return to the legal field of the Republic of Moldova. In my opinion, the final impact of this protocol decision is a document that is functional and this should not be seen solely in terms of the number of cars that are registered or not registered, but also in terms of the state border crossings by means of transport with neutral numbers”.

Alexandru Flenchea, ex-Vice-Prime Minister for reintegration: “The main gain of Chișinău following its participation in the car registration mechanism on the left bank of the Nistru River was the legalization. It is an important step in the final settlement of the Transnistrian conflict during the country’s reintegration. Tiraspol estimated that it could present the transnistrian cars registration as its success: “that, look, what we have got for you, freedom of movement around the world”. I believe that it is not important what is the motivation, as long as what is being done is right and the inhabitants of the region have had and have gained even more in the future. Even if until recently, they were able to travel to Ukraine and from there to Russia, with the transnistrian license plates, this does not mean it was good for them. If these cars got in an accident, even if they were not to blame, people could not receive the compensations from the insurance company because of several legality aspects. As for Kiev’s interest, the Ukrainian authorities, well before 2018, have clearly indicated that the situation they have tolerated for decades since the collapse of the Soviet Union can no longer continue. Ukraine has very well ensured that it does not impose restrictive measures until there is an effective mechanism for legalization of cars in the Transnistrian region”.

Ion Manole, Executive Director, Promo-Lex: “There is little talk about the neutral license plates and the perception in the society is that we do not speak publicly about these topics  at an appropriate level. I would go back a little bit in history to remember what happened with certain people regarding the freedom movement, because car license plates are actually nothing more than an element of freedom of movement. We, as a human rights organization, recorded in 2006-2020 many cases when our citizens on the left bank of the Nistru River suffered because they did not have these license plates issued by the administration in Tiraspol. Thus, when Tiraspol tried to introduce its own license plates, Chișinău assisted passively, leaving to the fate the inhabitants on the left bank of the Nistru river, who actually refused to accept those license plates of Tiraspol. Step by step, citizens were forced to accept them. But they could not leave the Republic of Moldova if they kept those plates released by Tiraspol. As a result of these circumstances,the ordinary citizens were the ones that suffered.”

Andrei Popov, Head of the Multilateral Cooperation Directorate, MFAEI: “We have currently a very important thing. After Ukraine’s sovereign decision not to allow the access of the cars with the license plate numbers legalised to its territory from September 1, 2021, the request for the license plates with neutral numbers got tripled. So far, many residents did not take it seriously the change of these numbers and once it has been seen that the decision is no longer postponed, it led to the increase of demands. According to the OSCE mission report, if 191 license plates were released in May this year, in July it increased to 239 and in August to 371. During these months, Tiraspol has talked about the risk of a humanitarian crisis, that citizens and transport would be blocked. But the reality is as it follows. In the last two weeks, 1300 vehicles with neutral license plates have been admitted to Ukraine and not only 90 cars with transnistrian numbers have been admitted. We do not have a figure of tens of thousands. And there is one more thing that has not been talked about. In recent years, some 6000 neutral license plates have been released, but the number of Moldovan licenses is already approaching 40 thousand for the inhabitants from there. Thus, these licenses certify that the citizen belongs to the state of the Republic of Moldova”.

For more details, you can watch the event’s video record on privesc.eu  here and on Realitatea Live here.