Disproportionate workload in courts – an obstacle to the efficiency of justice 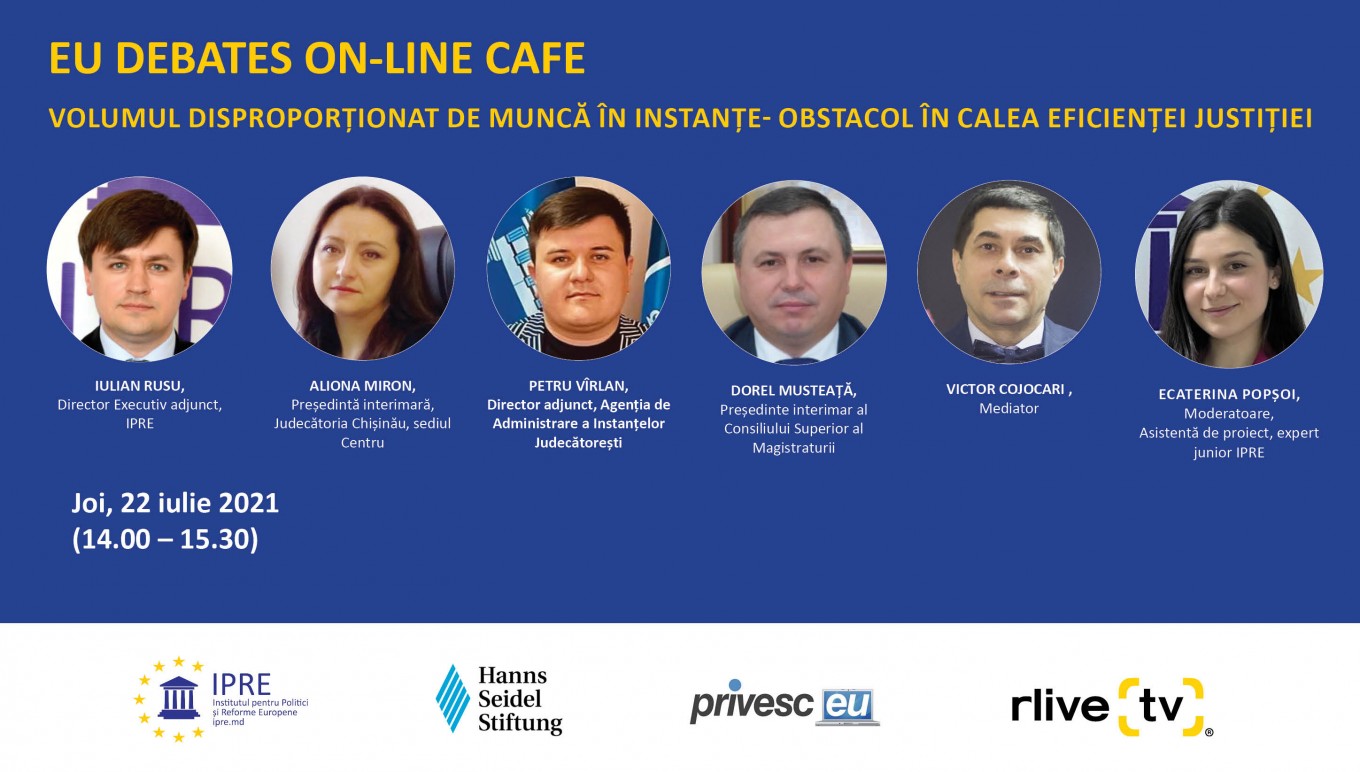 The Institute for European Policies and Reforms (IPRE), with the support of the Hanns Seidel Foundation in the Republic of Moldova and in media partnership with Privesc.Eu and Rlive.md, organised on Thursday, July 22, 2021, the eighth online public debate in the #EUDebatesCafe format dedicated to the disproportionate workload in the courts, which is an obstacle to the efficiency of justice.

The invited speakers at the event, which was moderated by Ecaterina Popșoi, project assistant and junior legal expert at IPRE, talked about the workload of a judge in court and how it influences the efficiency of justice, which are the main legal, technical or institutional constraints that generates this disproportionate workload, what is the approach of the Superior Council of Magistracy in relation to this issue, whether mandatory out-of-court mediation could be an effective remedy to reduce the workload for judges and what are the key actions that need to be taken in the short term to quickly resolve this problem.

IULIAN RUSU, Deputy Executive Director, IPRE: “According to data of the Agency for the Courts Administration, in 2020 a judge was responsible for about 541 cases, which is a huge burden. This issue is very painful for the Moldovan justice system. In some courts this figure can reach thousands of cases. This is a serious problem, which concerns not only the emotional state of judges, but also the quality of judicial proceedings. Excessive workload, inevitably, has an impact on the quality of the act of justice, and this can lead, for various reasons to non-compliance with certain terms or requirements related to the reasoning of court decisions. All this can lead to non-compliance with the deadlines or norms in the decision-making process.”

ALIONA MIRON, Interim President, Chisinau District Court: “The workload of the courts is excessively high, and this fact has been rasied for a long time. Although we had a very long pandemic period, we have nevertheless examined many files. Thus, in the first half of 2021, about 16.1 thousand cases were registered in the court of the Center sector, of which over 15 thousand were examined. If statistics show that on average a judge has more than 500 cases for examination, then in Chisinau this number exceeds one thousand. Let’s not forget the complexity of the cases. Because it is concentrated in the urban environment, not in the districts. The complexity of the case also means that more time is needed to study the legislation and to hear people. Thus, this has a direct impact on the quality of the act of justice. Another issue is staffing. For example, in courts of Centre and Ciocana districts, where there is a high volume of work, we do not have the possibility to have all staff, and their capacity was less than 50% over the last two years. Also, considering the amount of the salary, we do not have the best people to cope with the workload. Thus, after a while, people transfer to other courts, where they have less workload at the same salary.”

DOREL MUSTEAȚĂ, Interim President of the Superior Council of Magistracy: “The SCM knows all the problems faced by the judicial system. Various measures are being taken to remedy the situation, but unfortunately, we do not have full capacity to intervene. For example, thanks to the last amendments from last year, we have the initiative to address to the Constitutional Court. We are counting on the fact that we will also have a legislative initiative and then it will be much easier to operate and to come up with some legislative proposals to the Parliament. The SCM is open to everyone, both the litigants and judges, development partners, and welcomes any proposal, idea, approach to address the issue of workload and efficiency of the judicial system. I consider that there is room for discussion and analysis regarding the state tax because justice in the Republic of Moldova is accessible to all and often the litigants abuse this right. We have registered applications that are subsequently removed from the register, are returned, cannot be examined, and have no finality. Respectively, this also increases the volume of work for the judge and the number of applications received. If the litigant, before filing a lawsuit, would consider whether it has a purpose or not and whether this claim will be imposed with fees, he will analyse the costs and then before filing the lawsuit would probably think several times. Unfortunately, we also relied heavily on mediation, we thought it would add value to the work of the court system, but it is basically zero and has not given any efficiency.”

VICTOR COJOCARI, Mediator: “One of the ways to reduce the number of court cases and thus reduce the workload of judges is mediation. Although the mediation law 137 of 2015 provided very good facilities to the parties, examination within a maximum term of up to 3 months, confidentiality, non-payment of the state fee in case of confirmation of the settlement executed voluntarily, mediation does not have the effect of decreasing the amount of files examined in courts. As an example, we analysed how many cases were registered in 2020 and how many transactions were made by mediators. Basically, 0.55% was received compared to the applications that were submitted in court. It is a very small percentage, and among the causes are: lack of information of the population, small market for all actors in the legal system, the profession of mediator being relatively new and unknown, the mentality of the population that strives to punish the opponent even if he loses more money by suing him/her. There is an annual increase of 20-50% depending on the number of transactions signed by mediators each year, but the amount is very small. In 2020 the number of referrals to my office has doubled, and this year it has doubled compared to 2020. So, we practically have an increase of over 100% every year. Thus, it is a good trend and practically if we analyse the referrals, over 80% are referrals with the value of the action up to MDL 60,000, 14-15% up to  MDL 200,000 and about 14 files that were over 200,000 thousand, so of low value or those which fall under the obligation of compulsory judicial mediation. For the court, examining these types of conflicts or disputes is a waste of time because most of them are very simple.”

PETRU VÎRLAN, Deputy Director, Agency for Court Administration: “We currently have a series of measures and actions we are working on, and we also have a very good collaboration with the SCM to identify appropriate solutions to these problems. One solution would be, and we recommend, the distribution of cases per headquarters because the workload will be equal to all judges, not per headquarters. We see that the monthly average per judge for last year is 58 cases, while in the European Union the average per judge is 30 cases. So, in our country the workload for a judge is double. This is due to the fact that although each judge is assigned a court clerk and a judicial assistant, we have courts where judges do not have judicial assistance and the volume and workload for the judge is higher. At the same time, at the level of the Council of Europe we are on the last place in Europe in terms of the number of judges per hundred thousand inhabitants. In 2018 there were reported 11.8 judges per 100 thousand inhabitants and in 2020 there were reported 15 judges per 100 thousand inhabitants. The rate is practically tiny compared to the recommendations of the Council of Europe according to which we must have 23 judges per 100 thousand inhabitants. This means that judges do not cope with their duties, and the quality of the act of justice suffers greatly. In order to have the efficiency of the act of justice, we recommend that the number of judges be increased. As for us, we are going to launch the e-File (e-Dosar) application which will reduce the time of action, and the court decisions will go much easier to execution.”

The event was organised within the framework of the project “EU DEBATES CAFÉ: Advancement of knowledge and expertise on EU institutions and policies in the Republic of Moldova”, implemented by IPRE in cooperation with the Hanns Seidel Foundation in the Republic of Moldova and with the financial support of the Federal Ministry for Economic Cooperation and Development.