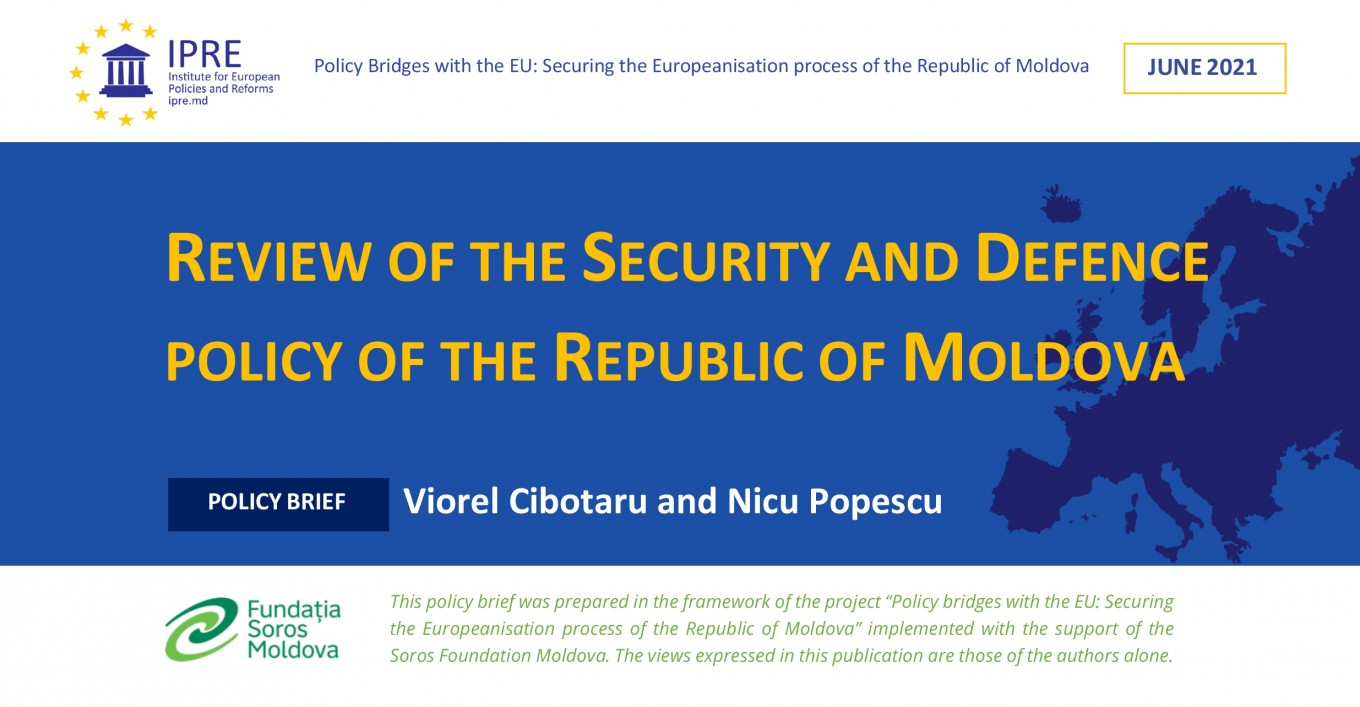 The Institute for European Policies and Reforms (IPRE), with the support of the Soros Foundation Moldova, organized on Wednesday, June 23, 2021, an online public event on the review of the defence and security policy of the Republic of Moldova.

During the event, the findings of the IPRE policy brief prepared by Viorel Cibotaru is the Executive Director of the European Institute of Political Studies in Moldova (IESPM) and Nicu Popescu, Director of the Enlarged Europe program at the Paris office of the European Council on Foreign Relations (ECFR). The brief assesses the outstanding issues and priorities to help advance a national strategic security sector review, including the reform of the National Army and the Security and Intelligence Service, which should lead to development in the short to long-term a set of laws and policy measures for the implementation of a security and defence policy, harmonised with key foreign policy guidelines of the Republic of Moldova.

Petru Culeac, Executive Director of the Soros Foundation Moldova: “Threats to the security of a modern state are diverse. Recent crises in the region or in the world remind us of this once again. The policy brief prepared by IPRE highlights this fact and draws attention to the fact that the security and defence policy of the Republic of Moldova should not be concerned only with the existence of a frozen conflict or the foreign military contingent on state territory, even if these are priority areas. Security policy must also address a much wider range of issues. I think it is very important that the authors draw attention to the need for an integrated approach to a review of the security sector, to be better adapted to modern realities, to be better able to respond to the multitude of new risks, such as attacks. cyber or hybrid wars. I am afraid that the realization of this desideratum in practice is a bit more difficult and represents a massive challenge for the state authorities, especially if we consider that the Republic of Moldova had a permanent security deficit. The state has not always had a very clear vision or sufficient capacity, resources and political will to respond adequately to these challenges. In this context, it is important for the authors to call for security reform to be carried out with the widest possible participation of all pro-reform actors and competent authorities”.

Ana Revenco, Secretary of the Supreme Security Council, Presidency of the Republic of Moldova: “I want to believe that the well-being of citizens is directly conditioned by the level of security that a state can and delivers to citizens. On the other hand, determining the state, the institutions, for the security sector to work efficiently, while ensuring civil liberties, is an ambitious task. The imperative to be presented in the IPRE document is to emphasize, first, the impotence of an integrated security system. Equally important is the contribution that civil society can make of a new stage in the review of security policy. Reform proposals are needed, including to enable the President of Moldova to fulfil her mission and policy guidelines in the field, thus ensuring a good strategic decision-making process. At the same time, I notice a series of legislative gaps, which prevent the efficiency of security institutions and, as appropriate, call for the need to improve this control mechanism. In the Republic of Moldova, important steps have been taken in the field of armed forces, especially due to external partnerships, and the process of systemic transformation in the security sector and the improvement of democratic control mechanisms. That is why it is necessary to talk about the second generation of security system reforms, focused on the integrated and complex approach to the system development”.

Viorel Cibotaru, Executive Director, of the European Institute of Political Studies in Moldova: “One of the purposes of the policy brief was to mobilize the community of experts, of all those who have responsibilities in the field for review both the problems and the state of implementation or finding solutions for them. It is important the process to integrate all the forces in our society, both civil servants in positions, experts in public and state institutions, experts in civil society, but society as a whole, because no matter how strange it may seem. But there are still some patterns of thinking and approach that need to be explained, sometimes rejected, such as the fact that the Republic of Moldova would not need an army because we have no one to fight with. The idea is to constantly come into the public space with simple examples that are understandable to the citizen because it is a pressing need to talk to the citizen in a way that he can understand some complicated things, and at the same time to maintain level as high as possible to see things in an integrated way in terms of cohesion between foreign policy, security policy and defence with the fundamental interests of the Republic of Moldova. All are generated by a quasi-need to make sense of the state by cleaning up institutes that are doubly compromised, both by the exacerbated level of corruption that has led to cases of high treason. This may require tougher, more determined, more energetic, and faster reforms. A small state like the Republic of Moldova must be smart enough and determined to adjust its plans and capabilities to geo-political and geo-strategic games insofar as it will benefit to the maximum for its citizens.”.

Iulian Chifu, President of the Center for Conflict Prevention and Early Warning, Bucharest: “Foreign, security and defence policy is a key European element and the future national security strategy will probably have to mention this because it is a diverse tool for achieving the same goals. Indeed, the army is absolutely mandatory and it is likely that at the level of the national security strategy, specifically in the size of military documents, it will be necessary to mention very clearly what are the objectives from defending the territory to participating, supporting other civilian emergency institutions, cyber defence, information warfare, psychological operations. In principle, I would opt for an integrated strategic analysis rather than a review. Because at the level of the magazine we would not have much to review because there were previously several evaluations, but there was not performed a full analysis or evaluation. And the previous documents, we are familiar with them, did not have a transposition into explicit activities.”

Iulian Fota, Director of the Romanian Diplomatic Institute: “The number one problem of the Republic of Moldova, 30 years after independence is the strength or power of the state of the Republic of Moldova. I think that at this moment, if you are proposing the national security reform, you are in a hurry and skip an important step because to reform a system, you need to have it first. It is mandatory, even in a democracy, for the command in a national security system to be unique. The principle of unity of command cannot be called into question when it comes to national security. And I, after 30 years of existence and functioning of the state of the Republic of Moldova, still do not understand where the single command is when it comes to national security in Moldova. The second aspect is related to the explanation of what you mean by “national” security, especially since when it comes to the Republic of Moldova the word “national” will confuse you enormously. When it comes to governing a country, civic governance can be sovereign and can very well be used in governing a country. The security strategy should never be confused with the government program. It must focus on the worst dangers or threats that a country must face. If these are not clear and are not specified, then the discussion about reforming the system is superficial.”

For more details, please read the Romanian version of the policy brief here. In English here. At the same time, you can watch the video recording of the event on privesc.eu here and Rlive.md here.