Home - Press Releases - Legality, integrity and security of elections for the voters in the Transnistrian region

Legality, integrity and security of elections for the voters in the Transnistrian region 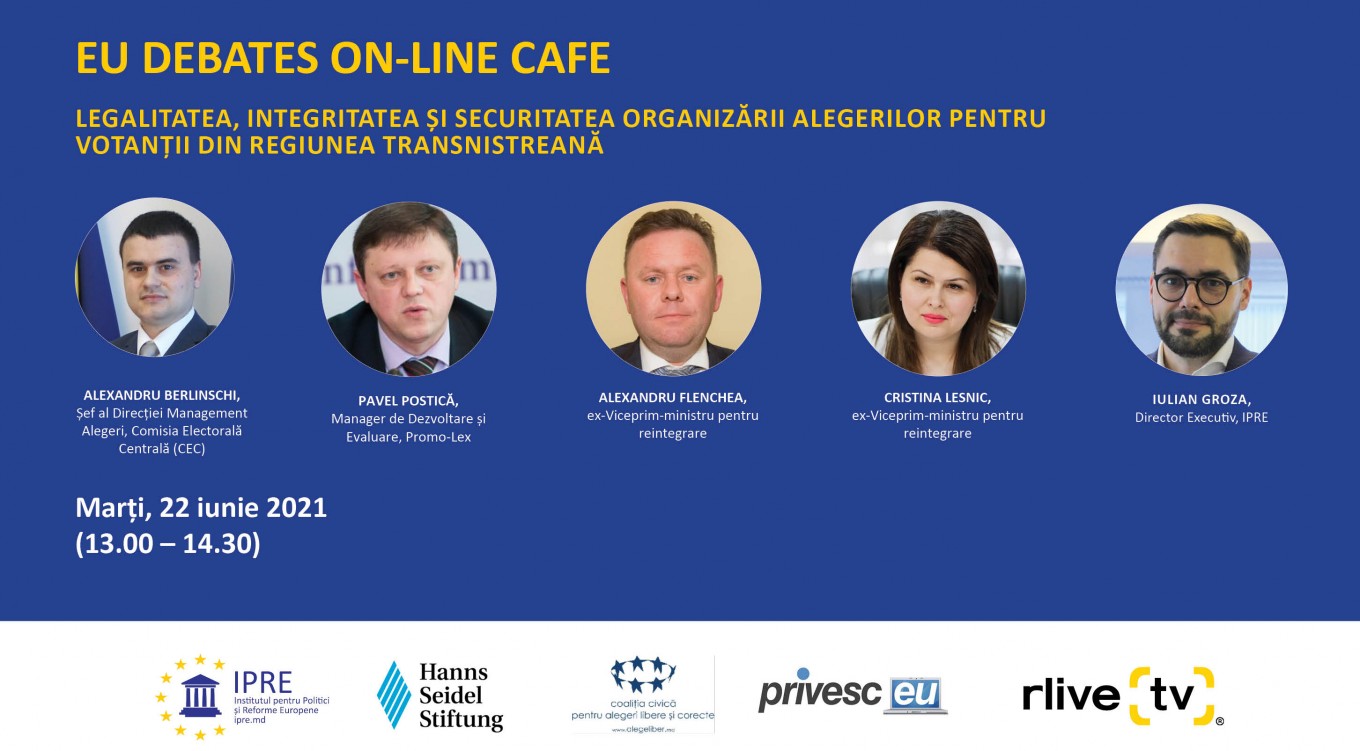 The Institute for European Policies and Reforms (IPRE), with the support of the Hanns Seidel Foundation in the Republic of Moldova, in cooperation with the Civic Coalition for Free and Fair Elections (CALC), as well as in media partnership with Privesc.Eu and Rlive.md, organized on Tuesday, June 22, 2021, the seventh online public debate in the format #EUDebatesCafe dedicated to the process of organizing the early parliamentary elections for the voters in the Transnistrian region.

The invited speakers at the event, which was moderated by Iulian Groza, Executive Director of IPRE, talked about the challenges related to voting process in early parliamentary elections for the Moldovan citizens residing in the Transnistrian region and possible solutions to mitigted existing problems and risks.

Alexandru Berlinschi, Head of the Elections Management Directorate, Central Electoral Committee (CEC): “Since 1994, the voters living on the left bank of the Nistru river, had the opportunity to exercise their right to vote. They participate more in national elections and less in local ones. It started with the organization of 8 polling stations, and gradually, the number increased, until the presidential elections in 2020, 42 polling stations were opened. The most massive turnout was in the second round of the 2020 presidential election, when about 31,000 voters voted. There was a high turnout in the second round of the 2016 presidential election and in the 2019 parliamentary elections. In order to open polling stations on the left bank of the Nistru river, it is necessary to take into account three criteria. First, as mention already, they can be opened only on the territorial administrative units, which are under constitutional control. For these localities, the data from that voter register are taken into account, as well as based on the pre-registration, which is carried out by the CEC. And, the last criterion, consists in the fact that when opening these sections, the number of voters who participated in the previous elections will be taken into account. I want to mention that the CEC knows the number of voters in the localities residing on the left bank of the Dniester, and at the moment 41 polling stations are open for over 258 thousand voters. Also, we know exactly the localities and respectively, according to the available data, the CEC will open the necessary sections on the territory under the control of the Chisinau authorities”.

Pavel Postică, Development and Evaluation Manager, Promo-Lex: “The right to vote is not an absolute right. It may be limited in certain circumstances by certain entities, but this must be provided for by law. The right to vote is directly connected with the right to be informed. It is not possible to speak of a conscious, freely expressed vote, as long as the right to be informed from all possible sources about the electoral process, candidate. is not ensured. The implementation of the right to vote in an occupied territory is complicated because some of the rights are violated by entities that have assumed the powers of public authorities. Thus, the ability of citizens in those territories to receive information can be questioned. I will give some examples that have happened historically. First of all, I believe that we must emphasize that in absolutely all national and local elections, the right to vote of the citizens of the Transnistrian region was deliberately blocked by the CEC, because they constituted constituencies and thus limited themselves. Thus, no electoral contestant filed any complaint and everyone tacitly accepted this decision. So far, there are no restrictions in the Electoral Code that directly prohibit the deprivation of the right to vote for voters in the Transnistrian region. At different stages there were various administrative actions that led to the limitation of the right to vote in this region. The consequences of opening polling stations on uncontrolled territory can be unpredictable and quite dangerous for the electoral process, but also the security of the state”.

Alexandru Flenchea, former Deputy Prime Minister for reintegration: “The political importance of the participation of the citizens of the Republic of Moldova from the left bank of the Nistru river in the elections should not be underestimated. At the same time, the development of this process is associated with several risks and problems. On the one hand, these risks are common to the electoral process, wherever they take place. We are talking about corruption of voters, multiple voting, organized transportation of voters to the polls, etc. To combat them, there are provisions designed by the electoral bodies, and not only. On the other hand, in the organization of the electoral process on the left bank of the Dniester there are also specific risks, which are not found in other regions. It is about limiting the access of electoral contestants to carry out their campaign in the region, limitations on access to information, limiting the access of electoral observers and limiting them in monitoring their elections. The same organized transportation of voters cannot be monitored if it happens in Tiraspol or Grigoriopol. Speaking of opening the two polling stations in Bender. This combines electoral, security and political risks. There is a risk of electoral fraud if observers and the press do not have unhindered access to Bender, which is a very tense area. There are also problems for state security. Voting in an insecure area means unsecured ballots, unprotected personal data, unsecured “voted” stamps, computers connected to state information systems that can compromise the country’s information systems.”

Cristina Lesnic, former Deputy Prime Minister for reintegration: “For me personally, it is a red line that state authorities must focus a lot on investing in security and the human rights dimension. The reintegration portfolio is very complex, difficult and not always just successes. We often hear blame and have to explain and justify certain decisions that have been made. But, of course, I also go from the hypothesis that certain things were learned in the pandemic, when it was possible to see how the traffic on both banks of the Dniester worked, when a lot of people could not get to work or study on a bank. or another. From my own experience I will return to a few elements. Thus, in the future it will be necessary to have a risk assessment. In my opinion, the risks associated with the administrative line are risks associated not only during the election period. I noticed that the voter pool in the Transnistrian region was exactly the potential of the electoral pool that voted last year in the diaspora. I believe that the capacity of voters in the Transnistrian region cannot be underestimated and that they should not be given access to organize their right to vote. It’s just that the security element had to be evaluated before the polling stations in Corjova and Bender were opened”.

This event is organized by IPRE within the project “EU Debates Café: Advancing the knowledge and expertise about EU’s institutions and policies in the Republic of Moldova”, implemented in cooperation with the Hanns Seidel Foundation in the Republic of Moldova with the support of the German Federal Ministry for Economic Cooperation and Development.