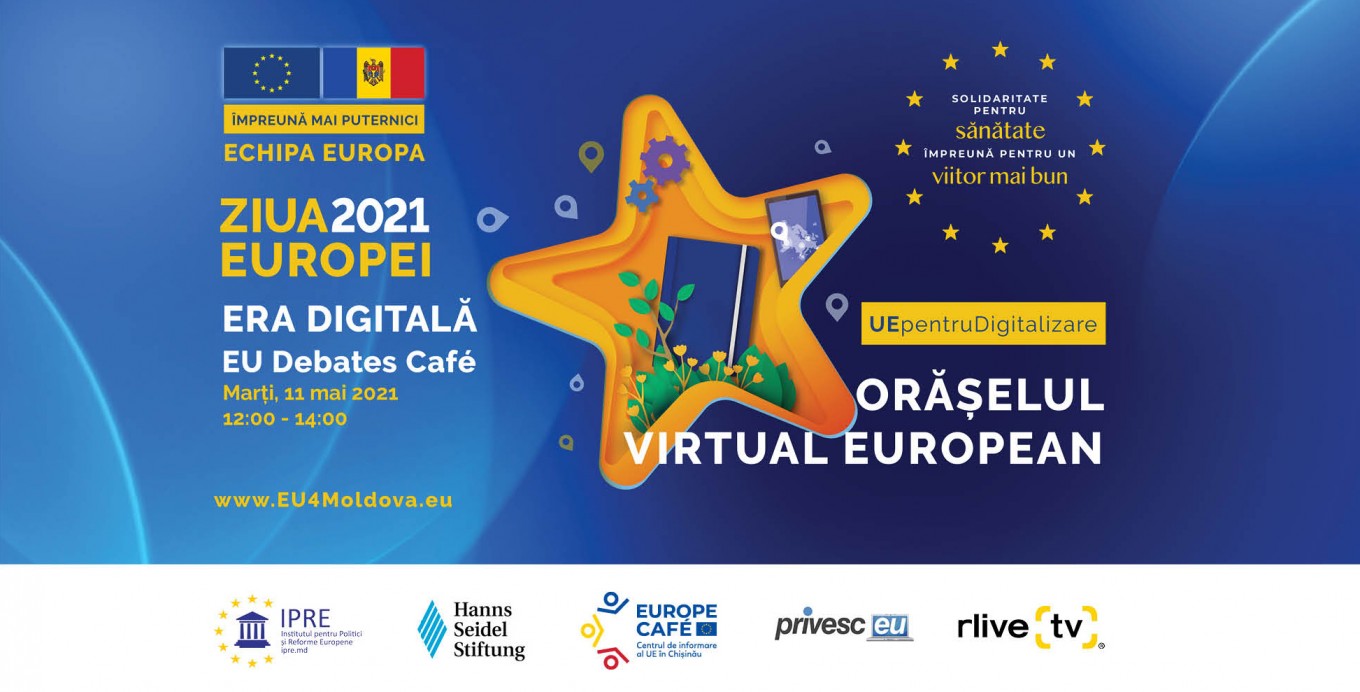 The Institute for European Policies and Reforms (IPRE), with the support of the Hanns Seidel Foundation – Republic of Moldova, in cooperation with Europe Cafe and the project “Visibility of EU and European Union Assistance in the Republic of Moldova in 2021”, as well as in media partnership with Privesc.Eu and Rlive, organized the fifth online public debate in the #EUDebatesCafe format: “New digital age and innovations: EU support for Education, Business and E-Services”.

The invited speakers at the event, which was moderated by Iulian Groza, Executive Director of IPRE, talked about the EU support for the IT sector, the digital age and innovations in education, business development and electronic services. How jobs in the digital and IT industries can help young people gain a better future. Why it is time for the businesses to move to the next level of development through digital tools and IT.  How the citizens can benefit from digital services.

E.S. PASCAL LE DEUNFF, French Ambassador to the Republic of Moldova: “Digital is one of the most spectacular innovations of humanity, achieving a profound transformation of our economies, societies and our habits. Digital continues to open up new horizons, constituting a real revolution. Thanks to online platforms, consumers have an extensive choice, have access to good quality goods and services at more advantageous prices, have new ways of communication and easier access to information, knowledge and culture. European and French digital companies support youth, well-trained and talented human resource in the Republic of Moldova. The challenge for the Moldovan authorities is to preserve and implement the digital solutions in the public service of the country’s future.”

TIMOTEJ ŠOOŠ, Deputy Head of Mission, Embassy of Slovenia in Bucharest: “The world we live in is quite turbulent. Digitalization is part of general social development, and this will happen in any case. We believe it is important to see how human development will go hand in hand with technological development, with a focus on the digital revolution. That is why we are pleased to see that education has become a key word in today’s discussions. In order for us to ensure digitalisation, which will contribute to the well-being of all in Europe, including those in Moldova, we must focus on education and human development in digitalisation. Also, given the ageing population, we need to see how to offer services not only digital, but also ways and options for different parts of society to empower them to use digital tools. During Slovenia’s EU Council presidency, which is due to start in July, Slovenia will focus on implementing the recovery plan and negotiate to ensure that legislation in the field focuses on wider development.

BENJAMIN BOBBE, Regional Representative of the Hanns Seidel Foundation in Ukraine, the Republic of Moldova and Romania: “We all realize very well that the most valuable resource is the human one, and technological innovations must be further developed together with citizens. We need to create trust by showing the opportunities and benefits of this process. The COVID-19 pandemic basically brought us closer to digitalization, a period in which we saw new technologies in robotics, biotechnology, digital industrialization, which developed rapidly in recent years and brought us benefits. But on the other hand, we must adapt them to the human factor and the public interest. Privacy issues, lack of trust, security concerns must be addressed, both in the private and public sectors.

ANA CHIRIȚA, Director of Strategic Projects, Association of ICT Companies of Moldova: “Artificial intelligence, digitalization and innovation are making their place in the Republic of Moldova and in the world, the pandemic only favouring this. In 2019, the IT sector in Moldova was about 390 million dollars, of which more than 280 million were export services. In the last three years, the figure has doubled, and increases are expected in 2020, even if it was a pandemic year. The sector has about 30 companies and more than 15000 specialists in IT alone. About 70% of households are connected to the internet, but the speed of the internet is one that needs to be improved. There is also work to be done on the training of staff and their capabilities.”

MARIANA RUFA, Executive Director, European Business Association (EBA): “Digitalization is an imperative today. There is a pressing need that will allow companies to remain competitive, to be able to increase their sales, to be able to reach customers in real time and to stay in the market thanks to and via digitalization. It is very important to distinguish between digitization and digitization. These, in fact, are two related principles. Digitalization means investment in all kinds of business processes of a company. Any business today has to adapt to the new digital reality, being forced to come up with very creative approaches in the way the business is conducted.”

VITALIA EŞANU, Founder at Evisoft, Privesc.Eu, VoteMeApp: The first innovation brought to Moldova in the field of mass media was “optical character recognition” in the 90s, which laid “the foundations of our country”. Later, the media became democratized and local newspapers appeared that could print the news cheaply, and then the internet appeared, which turned the plans upside down, and then social networks appeared. Now for small countries is a golden age in the field of innovation because we give practically nothing to the world, but we can take absolutely any innovation for free. Everything is open-source, the data is public and you only need a few people and a good idea to give back to the world and add value to your country for the ideas you make.”

SERGIU CANRAMAN, Professor of Mechatronics, College of Engineering in Straseni: “Our College is the only one in the country with of German model of vocational education. 50% of the students are studding in classes and 50% are in the representatives and partners of the college, where they acquire practical and theoretical skills in the field in which they are interested. The college empowers students with practical skills that are based on theory but linked to future job opportunities provided by partners companies. We have a variety of labs. For example, there is a robotics lab, where there is a robot that can be programmed. Students also work with 3D printers. The college has partnerships with both Moldovan and German companies that are providing employment opportunities for our students”.

RADU LAZAR, Regional Manager at Endava: “In our view, one of the most critical key factors for the development of the entire IT sector both in the country and at regional and European level is the development of human capital. And this is the direction in which we have invested a lot lately. Over the last 12 months we have organized two leadership programs with over 200 people involved, and as a result of these programs we have hired most people and we have been doing this for years.”

Victor Guzun, LID Moldova: “It is very important to mention that technology or everything that means e-Transformation is no longer just technology, so it is not just cars, phones or computers, but first and foremost it is the human factor. And if the human factor is not prepared to do this, and from this derives a lot of actions, then all these technologies do not help us. Being digital today is no longer just a matter of cybernetics or mechatronics, it’s actually a way of life. And whether we like it or not, if a person does not have digital skills, they simply will not be a person prepared for the time we are talking about now. We in Moldova have all the technical, legal mechanisms, human factors and the desire of some institutions to implement. It is absolutely clear that if it is wanted from a political point of view for a year, this process can be launched “.

This event is organized by IPRE within the project “EU Debates Café: Advancing the knowledge and expertise about EU’s institutions and policies in the Republic of Moldova”, implemented in cooperation and with the support of the Hanns Seidel Foundation. The event is also organised in partnership with the project “Visibility of EU and EU Assistance in the Republic of Moldova in 2021” and Europe Cafe. The opinions expressed during the event do not necessarily reflect the views of the European Union.