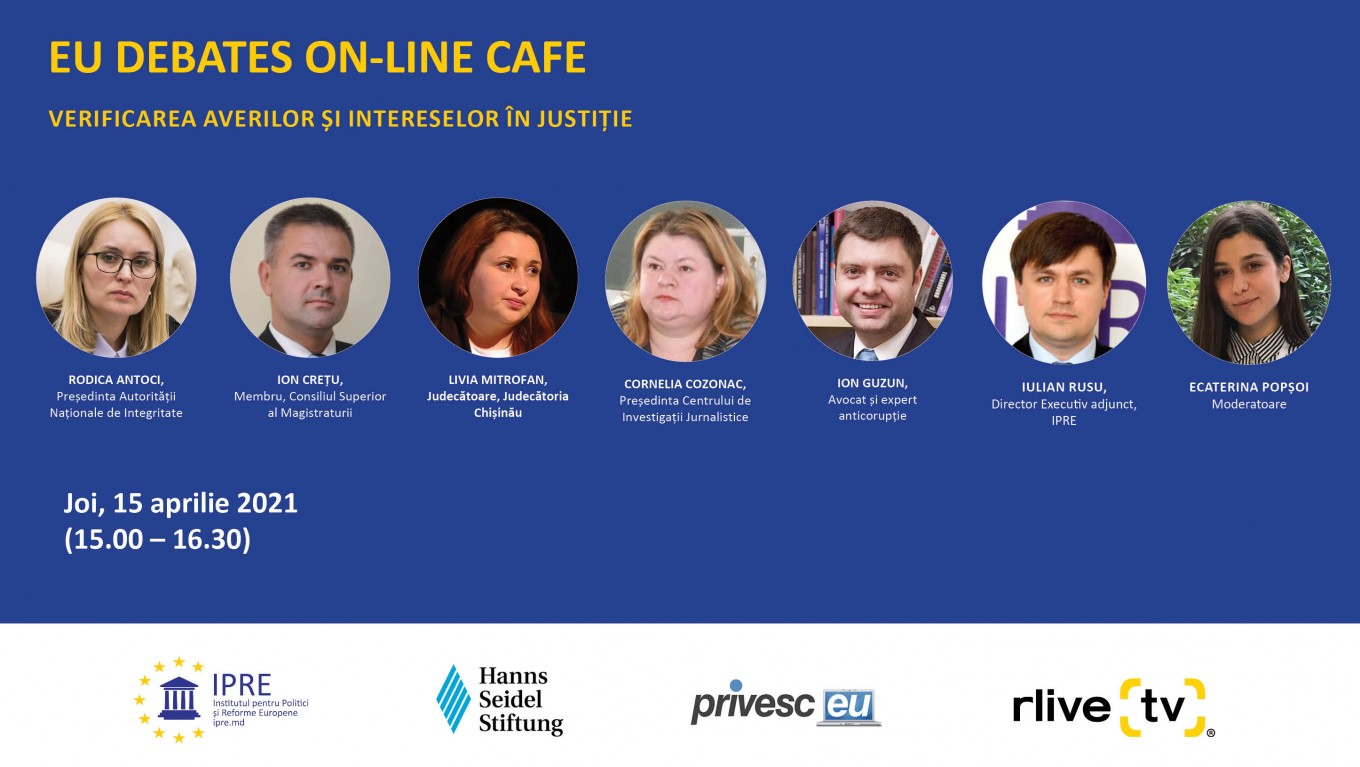 The Institute for European Policies and Reforms (IPRE) with the support of the Hanns Seidel Foundation in the Republic of Moldova and in media partnership with Privesc.Eu and Realitatea TV, organized on Thursday, April 15th,2021, the fourth #EUDebatesCafe video-conference from 2021, dedicated to the verification of assets and interests in the justice system, moderated by Ecaterina Popsoi, IPRE project assistant.

Iulian Rusu, Deputy Executive Director on legal matters, IPRE mentioned at the beginning of the event: “The society is disturbed by the journalistic investigations, which are made public, about the unjustified assets of professionals in the justice sector, which appear in their declarations and are not valued at fair value or are not declared at all. On the other hand, the state of affairs in judiciary is quite bad in terms of level of trust from society. So, such information further undermines confidence in the justice sector.”

Rodica Antoci, President, National Integrity Authority: “If we analyse the internal statistical data, as well as the results we have implemented, from the last two years, we ascertain some barriers that prevent the efficient enforcement of assets verifications and investigations based on assets declarations. Firstly, the subjects (judges, prosecutors) register the assets on relatives or third parties, admit donations or cohabitations, which they do not declare. There is also the possibility to declare the value of goods at derisory prices due to the lacunar and permissive aspects present in the civil legislation. We also have that obligation to demonstrate the intention to conceal assets in order to establish false statements. Another barrier is that judges whose guilt is proven are not dismissed. Why is this happening? Because not all the institutions are really involved in this process and we are lacking a close cooperation in order to demonstrate the lack of integrity of these categories of subjects. What could we do in the short term? I believe that consideration needs to be given to extending the scope of control of integrity inspectors to require the assessment of assets within the control procedure from independent assessors. Likewise, the possibility of inspectors to extend control over affiliated persons because we have parents who are donors or those who own the properties of judges. All these proposals are included in the NIA’s draft amendments, which we have been promoting since 2019”.

Cornelia Cozonac, President, Investigative Journalism Centre of Moldova mentioned: “We have been writing investigations about undeclared assets in the justice sector since 2012, and since then the problems have not been solved. We still have cases. Just last year we were writing about the prosecutor Igor Popa, who is divorced in documents, but my colleagues followed and filmed him for a long time so that they could catch him coming out of that house, where his wife also lives. So, he actually lives with his wife, but does not declare the goods in the asset declarations. It is the same scheme that we revealed in 2012, but also in the case of other litigants, but we did not see NIA to investigate this aspect. We also met with anti-corruption prosecutors, with NIC representatives at that time. They explained to us why they could not investigate the cases, because the legislation does not allow them to investigate the assets that were registered on someone else, especially if they are divorced. Although, Romanian prosecutors said that they can investigate such cases. Another problem is the business that some judges and prosecutors run from the shadows, which have not reached the NIA’s attention. Let me remind you of the case of the Prosecutor General, Alexandr Stoianoglo, who for years has not declared the income from his wife’s business. Journalists expect NIA to be more “courageous” with those who try to bypass the law.”

Ion Crețu, Member, Superior Council of Magistracy: “When we talk about justice all the arrows are directed primarily against the judicial self-administration body, but unfortunately not always the judicial self-administration body is able to make order on its own. Many problems cannot be overcome due to legislative flaws, such as the Law on the selection, performance evaluation and career of judges, which contains no criteria for the integrity of candidates aspiring to the position of judge or those who want to be promoted. It is left to the discretion of the SCM to establish, the selection criteria, through a regulation. According to the current regulation, the candidate must accumulate 85 points, out of which 60 points are given by the Evaluation College and a maximum of 2 points relate to integrity, fairness, and other similar issues. The problem is not at the SCM level, but at the legislative level. SCM cannot adopt primary norms. Such criteria must be provided by law. Regarding the declaration of assets, the SCM could not verify the assets of magistrates, because it cannot arrogate such powers, it only complies with what NIA establishes.”

Livia Mitrofan, Judge, Chişinău District Court “The declaration of assets by judges is a very complex subject. Since 2012, a series of legislative acts and strategies have been approved in the justice sector, but right now we are still talking about corruption in the system, conflicts of interest or undeclared assets. And I wonder if the problem is in the law or in its clarity. I personally believe that the problem is not in the law, but in its quality, in people, their interests and the application of the law. I would like to mention here that in any perfect law an imperfection will be found when it is intended to apply it bad faith. First of all, judges are interested in identifying and eliminating corruptible factors from the system. It is a problem that affects both the image of the system in general and each individual judge. In my opinion at the moment there are two institutions, which have the possibility to verify the assets of judges. It is NIA which verifies how the assets and goods of judges were declared. Another institution is SCM, which promotes judges to key positions.The promotion of integer judges in the system gives a judge a legitimate hope of having a career ascent. Maybe the judges are not that vocal, but we know each other. Moreover, I have noticed a tendency that when we talk about corruption in the system, we are talking about all judges. And I would like to ask civil society and journalists not to speak in general about the system that it is corrupt. There are a lot of honest people in the system, and this discourages them. We should talk about concrete cases, with the necessary notifications to the competent bodies. If a mismatch between income and expenditure is identified, it is assumed that the money is illicit, here NIA must come with a clarification. A good idea is to have all judges ex officio checked.”

Ion Guzun, Lawyer, anticorruption expert “The last Barometer of Public Opinions from February 2021, to the question “what are the main causes of corruption”, we actually see that citizens say they are the political system, legislation that does not work, poverty, etc. To the question “how much you trust…”, we see that the law enforcement bodies have a very low level of trust among people. Also, in the data presented in 2020 by the Agency for Court Administration, 181 cases were examined in which courts exposed themselves on facts of corruption. At the same time, we see that there are many cases that have been on trial for more than 36 months. I understand that it is very difficult to examine cases on complex financial investigations, but I do not think that those cases of small corruption can be in court for a long time.Thus, the delay in examination of such cases leads to a weak impact and we do not have real truthful sanctions for acts of corruption. Thus, in the future, the large-scale corruption must be targeted, anti-corruption institutions must be strengthened, data exchange partnerships must be established with the authorities with similar competencies in Romania, Bulgaria, Ukraine. There must also be transparency in the activity and publication of key data, the links of civil servants and the affairs in which they are involved investigated, and effective sanctions for corruption and other related crimes applied.”

The event was organized within the framework of the project “EU DEBATES CAFÉ: Advancement of knowledge and expertise on EU institutions and policies in the Republic of Moldova”, implemented by IPRE in cooperation with the Hanns Seidel Foundation in the Republic of Moldova and with the financial support of the Federal Ministry for Economic Cooperation and Development.