Home - Press Releases - How to involve the diaspora in both local and national development projects?

How to involve the diaspora in both local and national development projects? 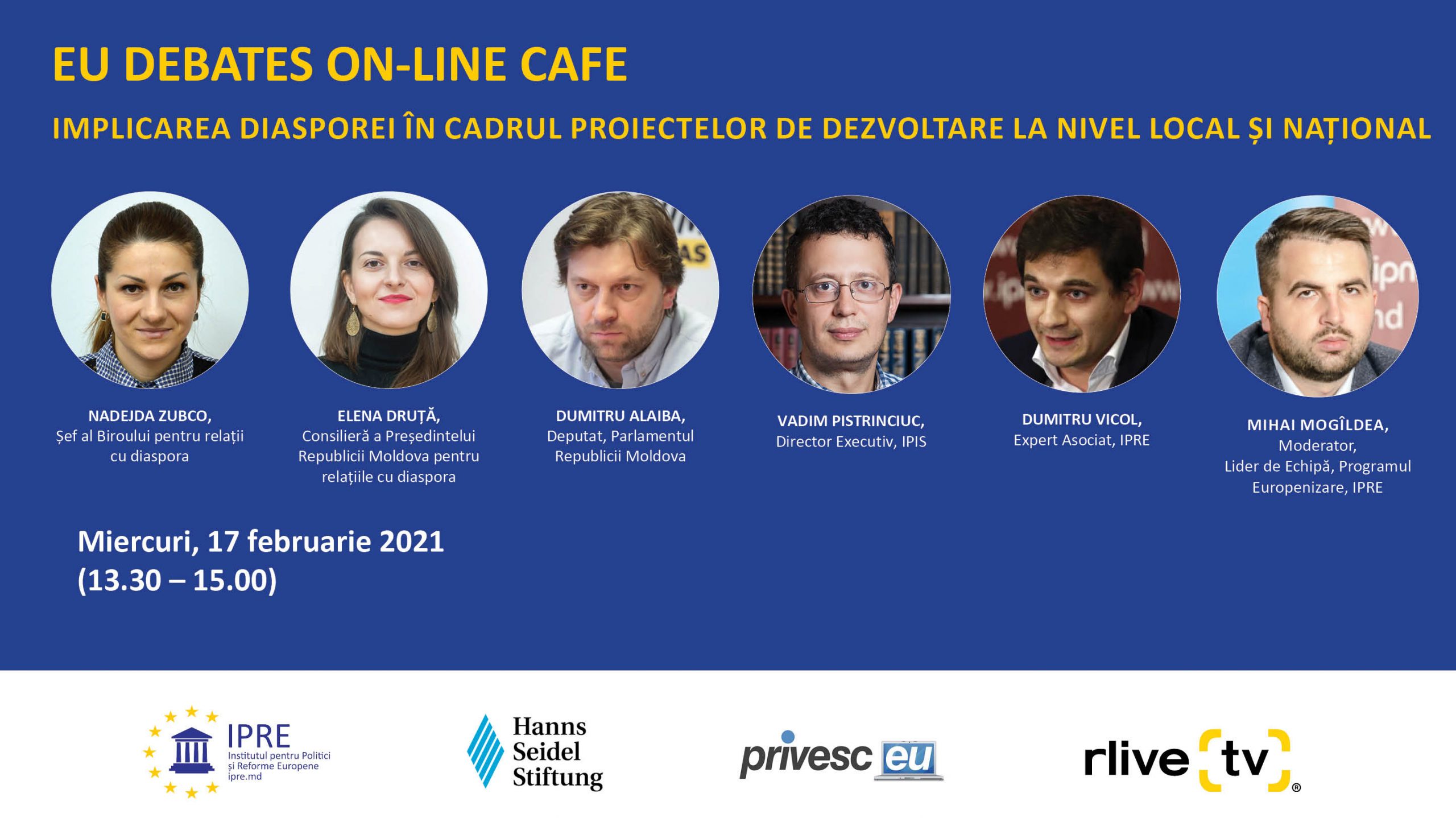 The Institute for European Policies and Reforms (IPRE), with the support of the Hanns Seidel Foundation, and in partnership with Privesc.eu and Rlive.md, organized on 17th of February, 2021, the first online #EUDebatesCafe videoconference in 2021, dedicated to the main obstacles and opportunities for the cooperation between the diaspora communities and local authorities.

The speakers of this event, moderated by Mihai Mogildea, Team Leader of the Europeanisation program within IPRE, discussed the implementation of governmental policies related to the diaspora field and their subsequent results. They have also touched upon the main challenges for the development of substantial dialogue between governmental authorities and the Moldovan diaspora, how may the diaspora contribute to the development of strategic projects of national interest, and how to increase the interaction between the local/central authorities of the Republic of Moldova and the citizens abroad.

Please find below the main contributions of our speakers.

Nadejda Zubco, Chief of Diaspora Relations Bureau: “If we talk about the regulatory framework in place, we have a multitude of documents, which include the field of diaspora, migration and development. We also tried to work on a study, which actually shows the share of this field in politics. If I am referring to the Diaspora 2025 strategy, then I can say that at the stage when it was elaborated, it was perceived that this field should be included in the national policies in proportion of 80%. Thus, in 2019 we already have a percentage of 82%. The normative framework is good and there is interest from other states related to its guidance and implementation mechanism. However, we do not have an analysis of the extent to which the regulatory framework meets the needs of the diaspora. It is a priority for 2021. At this stage, from the analysis we have, 46 sectoral policy documents contain that component. These days, the “Diaspora Succeeds” program was launched, which runs from February 15 to March 21, 2021. It is a program for local public authorities and aims to support local development projects with the involvement of the diaspora. It has already been successfully implemented in 2020 and 42 local development projects have been implemented. These programs are financed according to formula 1 + 3, where the Government is involved with 50%, but not more than 250 thousand lei”.

Vladimir Pistrinciuc, Executive Director, Institute of Strategic Initiatives (IPIS): “I think a lot has been said about the role of the diaspora in the life of the country. Purely politically, I believe that the state and the institutions of the Republic of Moldova are behind this collaboration with the diaspora. The diaspora is fully involved in all aspects. The economic importance is enormous, as is the exchange of practices. During the pandemic we saw the emergence of very strong networks of mutual aid and the organization of philanthropic actions outside for the people here and the medical institutions. These philanthropic projects are not short-lived or unique. We have regular projects, which take place every year. Another role is a political one. We have seen that the diaspora can not only vote, but can create pressure. And here again the state has certain gaps. The main challenges are very simple. The first is fear. Unfortunately, in our society there are political parties, which look at the diaspora only in terms of voting. This great challenge is both for civil society and for those in the diaspora, so that people do not look at the diaspora only in terms of voting. In the context of the fears we have, for example, there is also the vote by mail, which we are afraid to implement.”

Dumitru Alaiba, Representative, Parliament of the Republic of Moldova: “I do not think that the current Parliament generally has a vision on this subject or a healthy dose of correct priorities for the diaspora. It is not the first time that we have a kind of majority, either in Parliament or in Government, which does not like the diaspora. Let us remember how the Office of the Diaspora itself was institutionalized, which was founded by the Government and against which, over a few years, the government found that the diaspora had been consolidated. Thus, we found that the diaspora is organizing against its own government. It is a process that I very much hope will be stopped. If we look at the last 10 years, we have quite different situations. How was the diaspora in 2010-2011 and how united, pluralistic it is now in 2021. Our diaspora made history last year, when 15% of the votes were from abroad. Through such actions, which are quite constant, our people show that they want to be part of the country and want to contribute to various initiatives. We are at a beginning when our diaspora is in a process of maturation. The people who are gone need a country to protect them and I believe that people will return, but only when they will have such a state.”

Elena Druță, the President’s Counselor for Diaspora Relations: “Recent political events have shown that the diaspora is a great political force, and behind the massive involvement of our citizens is an extraordinary desire to get involved. Our citizens, whether they are temporarily or permanently abroad, want to get involved, or in making decisions, when they are asked to vote, but they have also been involved in multiple initiatives, when they have been asked for help. The role of the diaspora in charity projects is also important. They managed even when they mobilized to save lives or initiatives during a pandemic. Also, in recent years the diaspora has been involved in multiple local development projects. In recent years, we have followed projects that were born within a project such as “Migration and Local Development”, which is implemented by UNDP and which is a successful project. This model is good because it makes everyone work together – those who represent the authorities, those who live in these localities, but also those from abroad. These projects have set as their objective to develop the infrastructure, to create social centers, cultural events. What we get at the end of this type of project is much more than just infrastructure. In these localities certain democratic mechanisms are activated, a community is created, which does not take into account distances.”

Dumitru Vicol, Associate Expert, IPRE: “There has always been a reluctance on the part of the authorities to cooperate at a distance with the diaspora. There was always the excuse that they should be physically present to do an analysis or read some documents. Fortunately, the COVID crisis has shown that this presence is not necessary. Thus, this opening has probably been seen in the last year and now I hope that this remote collaboration will intensify. The coalition of those in the diaspora happens precisely within projects or problems. Unfortunately, we form more coalitions when we have a political opponent, and the involvement of the diaspora in local projects is less visible and no attention is paid to these issues. If I refer to local projects, starting with 2015, the first local donation projects started to be implemented. For example, lighting in the village of Costesti was the first project with which we tried to start the wave. This was followed by others. All these things look good. You just have to be more discriminating with the help you render toward other people. However, I am not a big fan of donations because they mean a less contractual relationship, without obligations. Somehow now we should convince the world to move from donations to loans and that would bring change. If we were to convince the mayors or the authorities to borrow from the diaspora, it would be another relationship, in which the local authorities would be more responsible to deliver the actions they promised. Also, in this situation, those from abroad would be interested in monitoring the projects. And the third is that all or most people will return home and if they do not have an income, somehow these loans will allow them to have an additional income.”

For more details, you can watch the video recording of the event on privesc.eu here and on Rlive here.

The event was organized within the project “EU DEBATES CAFÉ: Advancing the knowledge and expertise on EU institutions and policies in the Republic of Moldova”, implemented by IPRE in cooperation with the Hanns Seidel Foundation in the Republic of Moldova and with the financial support of the Federal Ministry for Economic Cooperation and Development.