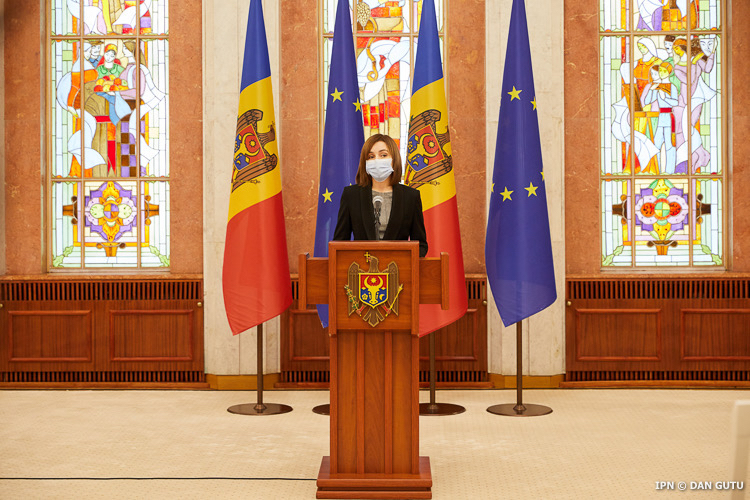 ”The success of the Republic of Moldova, but also of President Maia Sandu, as well as of the parties that want structural transformations, depends on some priorities less visible to the public. They derive not so much from the constitutional prerogatives of the President, but from the unprecedented trust invested by the citizens, through a massive vote, to a leader who pleads for and embodies a drastic change in the act of governing…”
———

Obviously, each of Maia Sandu’s 943,006 voters has their own expectations regarding the newly elected President. It is equally obvious that neither the electoral contestants, nor the voters, tailor their expectations according to the constitutional prerogatives of the president. Judging by the electoral promises of the candidate who won the November 2020 election, we understand that people’s expectations are enormous. At the same time, if we look more closely at how they are manifested publicly, for the first time we see a mutual understanding across society that the fulfillment of promises will not be easy and a wide perception that there is a lot of resistance.

The political crisis and the exotic situation of the current parliamentary formation makes us look for things that could easily escape the attention of a public debate, but also to ask ourselves questions to which the answer is more difficult to formulate: How wide has been the resistance to reforms and how it manifests itself, if in 30 years of state-building we failed to generate more order, justice and welfare?!; Why, year by year, the volume of fraud with public money increase, without a pertinent reaction of the state authorities in this regard?!; Who are the real beneficiaries of the democratic system in the Republic of Moldova – the citizens or ”certain” elites?!

Based on these questions, the mandate of the new head of state becomes much more complex than a simple implementation of electoral promises. Thus, the success of the Republic of Moldova, but also of President Maia Sandu, as well as of the parties that want structural transformations, depends on some priorities less visible to the public. They derive not so much from the constitutional prerogatives of the President, but from the unprecedented trust invested by the citizens, through a massive vote to a leader who advocates for and embodies drastic change in the way the act of governing takes place.

If we look at the anatomy of the political and administrative processes in the Republic of Moldova, we notice a hallucinatory duality. On the one hand, we have many good people in the institutions of force, administration, justice, politics, in business; citizens who know how to tax, to protest, to discern the truth and lies. The good ones are certainly more numerous. And on the other hand, in every field, in every institution, ministry, department, court, we have “ingenious” and extremely skilled citizens, who will juggle rights, laws, irremovability, judgments, arbitrations and courts – in short, they will resist by any means any attempt to change the state of affairs in our country. An extremely professional minority that knows how to argue legally, constitutionally, morally and institutionally why everything has to drag on, why theft is more legitimate than order, why punishment is impossible, and stolen property is protected.

Why does the state’s right to guard its property fade in the face of “ingenious citizens” who have seized public goods?… Namely this minority scattered through every state institution, is the belt of resistance to change or, at best case, the link that makes any reform a failure laid nicely on paper. The change-resistant minority succeeds in being well-organized and supportive, using its rights far more skillfully and perversely than most of us. That’s because they have something to lose and, therefore, fight hard for any millimeter of land – do not give up easily, because giving up their status means giving up rent. Or the state is a rather profitable business for this group from our society.

What makes the good ones weak?! They are not connected and led (each stays in his own shelter), they are more shy and even hesitant. Simply put, there are good people in institutions, but they need to be connected to each other, they need a leader who, despite the risks, will invest them with confidence. Trust for them means courage. In this sense, one of the “unseen” priorities of President Sandu is to identify and create bridges between those in institutions, agencies and ministries that want  to promote transformations, but are isolated and marginalized. Of course, it is extremely risky to bet on someone who has failed to prove that he or she can fight, that trust can be entrusted to them, but this is absolutely necessary. It’s similar to the military mobilization. There are many problems and we need soldiers.

Redefining the way in which the fight against corruption is carried out in the Republic of Moldova is a key milestone in the political career of Maia Sandu. Now this is also related to the expectations of the people related to her mandate as the head of state, which implies a risk. Or, a politician, deputy or minister, even president, stricto sensu has the least attributions in the fight against corruption. But a president empowered with a popular vote, as massive as it is desperate because of the situation in the country, must and can create pressure, in order to overcome people’s struggle with injustice and inequity. The first thing to start with is a correct diagnosis.

Both the community of experts and the public opinion consider corruption the main cause of underdevelopment, poverty, migration and stagnation of the Republic of Moldova. This is partly true – corruption affects all areas of life and makes us poorer, but it is not the cause of all evil, but rather a product of a bigger problem, namely the “kidnapping” of the democratic system by kleptocratic networks. Although in a deficient form, Moldova is a democracy, in which there are laws, rights and institutions empowered to protect them. The problem, however, is that the so-called kleptocratic elites, often fused with state politics and administration, those clever citizens who know how to make money mainly through schemes with the state, have excelled in their 30 years of independence. Corruption, injustice, the periodic capture of institutions, are just the effects of “empowerment” by citizens to become the main beneficiaries of the democratic system. Stopping the “kidnapping” of the democratic system by the “ingenious elites” is done by rebuilding the institutions, if not at any cost, then at a price above expectations. In a country where almost any crime can be tolerated, and those who quarrel with the law, make the laws in the Parliament, give sermons in TV studios and give advice to the Prosecutor’s Office, the solutions can be neither easy nor elegant.

An important step in the effort to restore order and trigger a real fight against corruption is diagnosis, by answering the questions: (1) which are the areas that most seriously affect the democratic system and the state? and (2) which “heads” of this phenomenon fuel not only the elites, but also the resistance to change of the system? Depending on the answer to these questions, the target of pressure from citizens and the president is to be set. To fight the whole corrupt system in Moldova means to stay in front of the windmills. That is why a new priority is imposed, less visible, but decisive for the president’s mandate – the fight for political integrity.

The struggle for political integrity

A recognized achievement, including by rivals (even unofficially), is that, through her political activity, Maia Sandu has demonstrated not only that honest political activity is possible in Moldova, but also that it ensures your victory. Party building, transparent political funding, new and healthy fundraising technologies – all these can be considered prerequisites for success. It is not just a personal or team triumph, it is also an achievement of the country, or political integrity must be one of the priority targets for the daily political struggle, waged by the president and pro-European political parties. On any given day, political corruption, illegal financing, manipulation and hypocrisy, must be the target of a fierce political battle, competition and interaction between different state institutions.

Funding political projects to cover illegalities or doing business with the state, must at least become inconvenient and difficult to access, and ultimately costly, inappropriate and dangerous. To achieve this goal, battles must be fought every day, with all available and visible means. During the pandemic and related crises, citizens began to become more aware of the direct link between corrupt politics and poverty.

Regardless of the scenarios – whether we will have early parliamentary elections, or a cabinet will be invested without consolidated support, a conjunctural majority guided by malice -, the way a political actor does politics, preventing access to finance hidden outside in gray areas, the fight against corruption and theft schemes, must be the key issues that citizens hear as often as possible and a constant headline of the anti-corruption agenda of the presidential institution.
———

Vadim Pistrinciuc is the Executive Director of the Institute for Strategic Initiatives (IPIS) and holds a PhD in sociology from the State University of Moldova.
———-

This Commentary was developed within the project “Policy Bridges with the EU: Securing the Europeanization process in the Republic of Moldova”, implemented by IPRE with the support of the Soros Foundation-Moldova, as well as within an IPRE partnership with IPN in the project “We and Europe”, supported by the Konrad Adenauer Foundation in the Republic of Moldova. The views expressed are the ones of the authors and do not reflect the position of the Soros Foundation-Moldova, KAS or IPN.