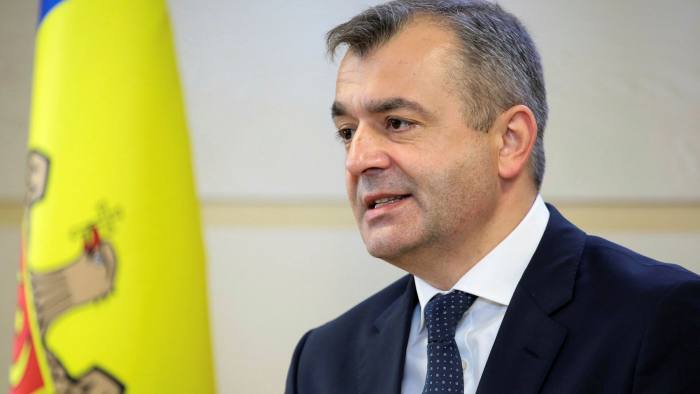 Ion Chicu’s departure comes a day before his pro-Russian ally is replaced as president by Maia Sandu.

Please use the sharing tools found via the share button at the top or side of articles. Copying articles to share with others is a breach of FT.com T&Cs and Copyright Policy. Email [email protected] to buy additional rights. Subscribers may share up to 10 or 20 articles per month using the gift article service.

Moldova’s prime minister has resigned amid a simmering power struggle between the country’s pro-western and pro-Russian camps, in a move that could pave the way for early parliamentary elections. Ion Chicu’s departure comes a day before his ally, the outgoing pro-Russian president, Igor Dodon, is due to be replaced by Maia Sandu, the pro-western former world bank official who won a landslide election victory last month.

Since Ms Sandu swept to victory pledging to tackle Moldova’s deep-rooted corruption problems, she has argued that early elections are needed, claiming that the current parliament, which is controlled by her opponents, had “proven that it doesn’t work for people” and includes some MPs who are “still involved in corruption cases”.

Mr Dodon and his allies had sent mixed signals about early elections, but he said on Wednesday that the government had resigned at the “right time” and that Ms Sandu must now “take responsibility for everything that happens”. However, analysts said that the move was an attempt to saddle Ms Sandu with the consequences of an extraordinary barrage of contentious legislation passed by Mr Dodon’s allies in the parliament in the weeks since she won the election.

Critics say that the legislation — which touched everything from the intelligence services to the financial system — risks destabilising the country’s politics, and undermining an economy that is heavily dependent on financing from organisations such as the IMF.

“All this resembles institutional sabotage, leaving the country under the presidency of Maia Sandu . . . in a crisis and isolated from international support,” said Iulian Groza, executive director of the Institute for European Policies and Reforms think-tank. “We are in a very unstable political situation, because as a result of these laws that have been passed, this or any future government will not be able to negotiate anything with the IMF or EU.”

One law passed by the Socialist party, to which the pro-Russian Mr Dodon belonged before becoming president, and its allies switched control of the intelligence service from the president to parliament, while another weakened rules around officials’ asset declarations. Other bills have sought to reverse an increase in the pension age, and repeal a 2016 law that underpinned the stabilisation of the financial sector following the theft of $1bn — worth around an eighth of the country’s economic output — from the banking system in 2014.

Some of the measures, such as the switch in intelligence service oversight and repeal of the financial sector stabilisation law, have since been suspended by the constitutional court.

But the blitz of lawmaking has created significant legal uncertainty, and allies of Ms Sandu say the moves amount to a scorched-earth policy. “Having lost the election, Dodon is trying to take not just his armchair, but also some state institutions with him,” said Nicu Popescu, who served as foreign minister under Ms Sandu during her stint as prime minister in a shortlived coalition last year. “He has been trying to use this month [between the election and Ms Sandu’s inauguration] to create institutional realities that have nothing to do with democracy.”

The burst of legislation has alarmed the international organisations that play a crucial role in Moldova’s economy, with both the IMF and the World Bank criticising the economic implications. Efforts to repeal the 2016 financial stabilisation law, which was passed as a condition for receiving loans from the IMF, have provoked particular concern.

The law allowed Moldova to issue bonds worth 13.5bn lei to repay the country’s central bank for the emergency loans it extended to banks caught up in the $1bn fraud. “The achievements [in restoring stability] since the bank fraud were significant and this is basically going towards reversing those achievements, and that would take Moldova back quite a few steps,” said Angela Sax, head of the Moldova office of the European Bank for Reconstruction and Development.

“Reversing the reforms is going to destabilise the country’s economic development, the financial situation and undermine the independence of the regulator.” Following Mr Chicu’s resignation, a new prime minister must be appointed.

If there are two failed attempts to do so, Ms Sandu can dissolve the parliament. “At least for the next six months, there’s going to be a period of instability for Moldova,” said Victor Chirila, executive director of Moldova’s Foreign Policy Association. “The political struggles will go to the limit.”