Home - Press Releases - What are the immediate foreign policy priorities of the Republic of Moldova?

What are the immediate foreign policy priorities of the Republic of Moldova? 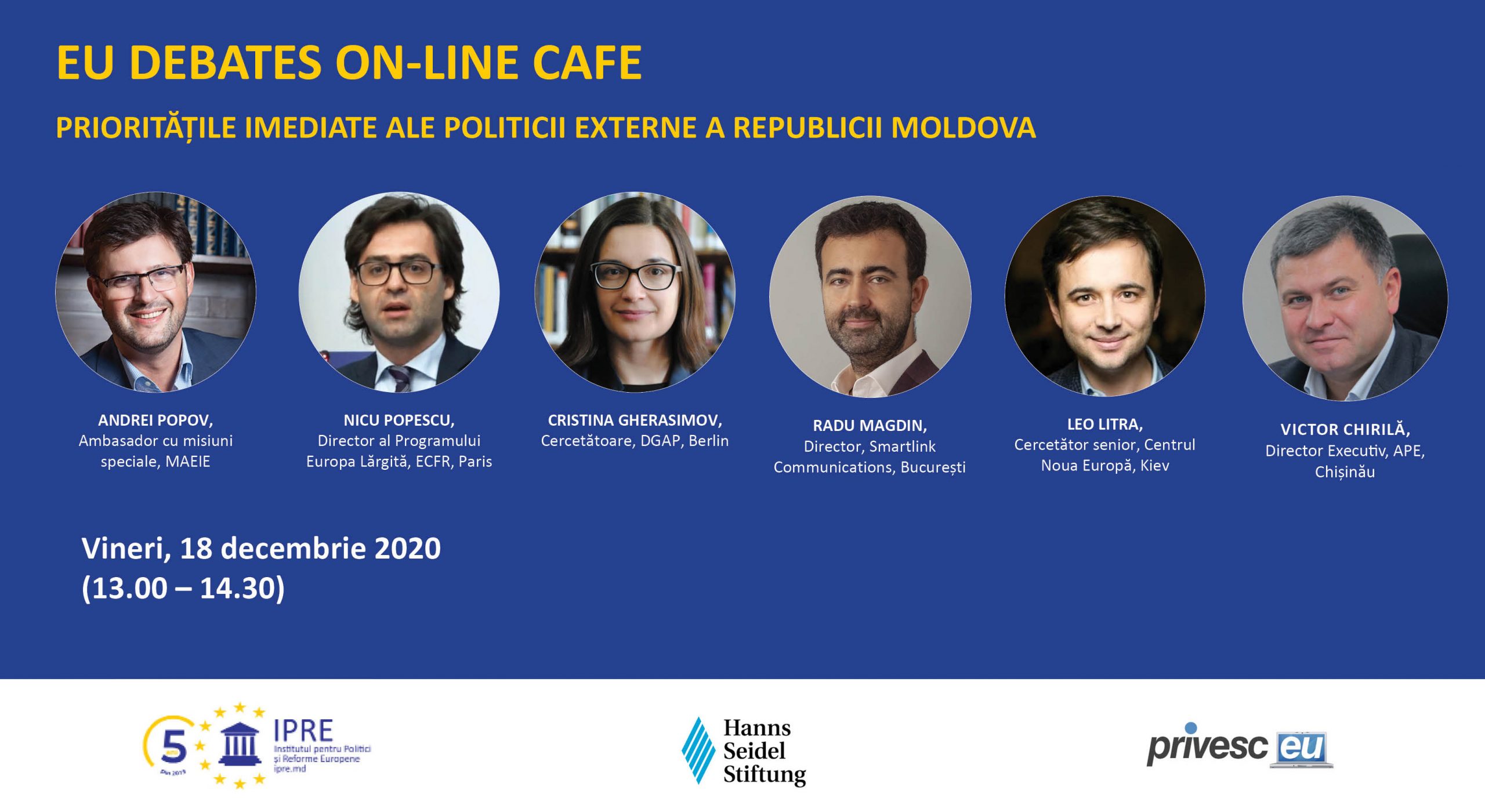 The Institute for European Policies and Reforms (IPRE), in partnership with Privesc.Eu and with the support of the Hanns Seidel Foundation, organized on Friday, December 18, 2020, the 12th #EUDebatesCafe online video conference, dedicated to the main actions at national level to establish the priority directions of the foreign policy of the Republic of Moldova for the next four years.

The invited speakers at the event, moderated by Iulian Groza, IPRE Executive Director, discussed the need for a possible new conception of foreign policy, the importance of synchronizing the efforts of Moldovan diplomacy with the vision of the President of the Republic of Moldova to ensure more consistency and predictability of foreign policy. and which could be the main immediate foreign policy priorities in the country’s relations, in particular with Ukraine and Romania, the European Union, the United States of America and the Russian Federation.

Here are some of the keynote messages addressed during the debate.

Andrei Popov, Ambassador with Special Missions, Ministry of Foreign Affairs and European Integration: In the Republic of Moldova the foreign policy priorities are set cler in all programs of governments. It is different, however whether it is always political will to promote these goals. Thus, I would like to say that from the perspective of the Ministry of Foreign Affairs, which is a governmental institution, one of the important criteria that ensures the efficiency and credibility of the foreign policy approach is the existence of a domestic policy stability. Often in the dialogue with external partners, diplomats, promote messages and build credibility, and this dialogue is built for years, which can be erased overnight. Another criterion is that only when the expertise and tools we have here can be fully exploited when there is a synergistic relationship between the other two poles of the triangle Presidency, Parliament and the Ministry of Foreign Affairs. Given that there is a clear relationship that national interests are promoted in coordination and the Republic of Moldova speaks externally with a single voice, then it is easy for us. And, when differences arise, it is very difficult to ensure the continuity of foreign policy”.

Nicu Popescu, Director of the Wider Europe Program, ECFR, Paris: “In these weeks we are really witnessing a historic moment. On the one hand, we have never in the history of the Republic of Moldova had four consecutive years, in which our foreign relations have been in a state of deep crisis in so many directions of foreign policy. We know that even under Vlad Plahotniuc, our foreign policy was pushing the country into bad relations with many partners in the country, and especially in the last year, this crisis has worsened, and we did not have a single partner who would have supported the Republic of Moldova. We have a situation where we have to overcome four years of deep disaster in foreign policy, and the solution for this process is internal reforms. Thus, the first step in foreign policy is internal reforms, because without these reforms we cannot fully benefit from the relationship with the EU and the USA. We cannot develop that relationship and we cannot have a stable and calm partnership with states like the Russian Federation or Ukraine, if the Republic of Moldova continues this deinstitutionalization of the state’s capacity to implement the most important functions in domestic policy. We must note with sadness that this attempt to deepen and continue the disaster in which the country’s foreign policy has been in recent years, continues, including through what I have previously called, a raider attack on state institutions by the former president, including the diplomatic service”.

Cristina Gherasimov, Research fellow, DGAP, Berlin: “The number one problem in the foreign policy of the Republic of Moldova is that we are isolated internationally from the realities of the current day. It is important to connect as a subject of international relations to the realities of the regional and European context, at least to start acting as a subject of international relations, namely, to clearly establish national interests, even if they seem quite clear in the regional context. and geopolitically in which we find ourselves. I have not heard for a long time about discussions on concrete directions and objectives of the Moldovan foreign policy, as well as the action plan to achieve them. Despite the fact that we have this well-targeted action plan, in order to achieve the proposed goals, we need political will and the synchronization of the Government’s efforts with those of the President. Ms. Sandu’s presidency is an excellent opportunity for the Republic of Moldova to reach new levels, if this synchronization takes place. The current situation indicates, however, that this will not be easy to achieve, at least until the next early elections, because there is no political will. Whether we have early elections or not, and regardless of the new configuration in parliament after the elections, one thing is clear – there are immediate opportunities that we can use in our interests or we can choose to miss them again”.

Radu Magdin, CEO Smartlink Communications, Bucharest: “Romania is delighted with the election of Maia Sandu as president. Romania is aware of the fact that there is a constitutional framework in Chisinau, and in this framework, the President has certain attributions, the Parliament and the Government – other attributions. Beyond this breeze of fresh air, the election of a new, clearly assumed, pro-European president with a very strong value sign will definitely influence the future parliamentary majority, which will result in a pro-European government that makes a good team. with Maia Sandu in implementing the necessary reforms for the Republic of Moldova. The assistance that will come in the meantime will be on the medical side. There will be a visit from President Klaus Iohannis, and expectations must be a priority in this area of ​​concrete health care. Any other more elaborate discussion on government plans, another kind of aid, I think will take place after a consolidation of the majority in favor or able to work with the president. The best support takes place in a context of trust. At 30 years of independence, Moldova is no longer a child. It is a new era for Moldova, in the best sense. You have the chance of a clean start. The regional context in its complexity within the Eastern Partnership also favors you once Moldova establishes the new parliamentary and governmental majority”.

Leo Litra, Senior Researcher, New Europe Center, Kiev: “Recently I had a discussion with the Ministry of Foreign Affairs of Ukraine about Ukraine’s priorities for next year in foreign policy, and unfortunately, the Republic of Moldova did not resonate in this discussion. I think that the lack of discussion about Moldova in this debate was somehow compensated by the visit of the Ukrainian minister to Chisinau, which was possible due to the election of the new President, Maia Sandu. I think it is a very good sign for the Ukrainian partners, but I would like to be careful with these statements, because good signs do not necessarily mean good results. The Ukraine-Moldova agenda is a busy one, possibly more busy than the one with the Russian Federation. I had several governments in Chisinau, which were friendly with Ukraine, I do not mean the last four years and the mandate of Mr. Dodon, but things have not changed. It is true that there is a greater confidence and desire to solve certain problems, but the principle that has existed so far in the relations between Ukraine and Moldova is that everything must be agreed “package”. Well, this method does not always work and the issues cannot be solved very easily. I hope that Ms Sandu’s visit to Kiev will be a productive one, where she will start solving certain questions. We must remember that we had a good start in 2019, when Maia Sandu visited Ukraine together with Nicu Popescu. Then I could see that there was a mutual sympathy between Zelensky and Sandu. It was seen that for both Maia Sandu and Zelensky, one of the priorities is to fight smuggling, especially in the Transnistrian perimeter of the Moldovan-Ukrainian border. The opening of those common points on the whole border is very important “.

Victor Chirilă, Executive Director, Foreign Policy Association, Chisinau: “The election of Maia Sandu as president, but also the openness shown for her by Kiev and Bucharest, Brussels, Paris, Berlin, is a great opportunity for Moldova to relaunch foreign policy, but also the European agenda. Unfortunately, everything that has happened in recent days in Chisinau, the recent decisions taken in Parliament, decisions taken by this “triumvirate of oligarchs, thieves and opportunists” composed of Dodon, Shor and Plahotniuc, deepen even more the harm done so far and the European integration agenda. Moreover, our relations with the USA, the EU, the IMF, with Romania, all came to a standstill because of these laws. Without overcoming these problems created by these laws, it will be impossible to relaunch our cooperation agendas with these actors. To be effective in foreign policy, Maia Sandu needs the support of the Government, the Parliament, but both institutions are hostile at this stage. Without the information provided by the Ministry of Foreign Affairs, it will be practically impossible to put into practice everything that Maia Sandu will agree or establish with our partners in Kiev or Bucharest, or the European capitals. I think that the next six months are decisive for Moldova and foreign policy. What we need at the moment are early elections, the formation of a governing alliance that would support the European agenda, the profound reform of the diplomatic service and the Ministry of Foreign Affairs”.

For more details, you can watch the video recording of the event on privesc.eu here and on Realitatea Live here.