The vote of diaspora – optimal solutions for the current challenges 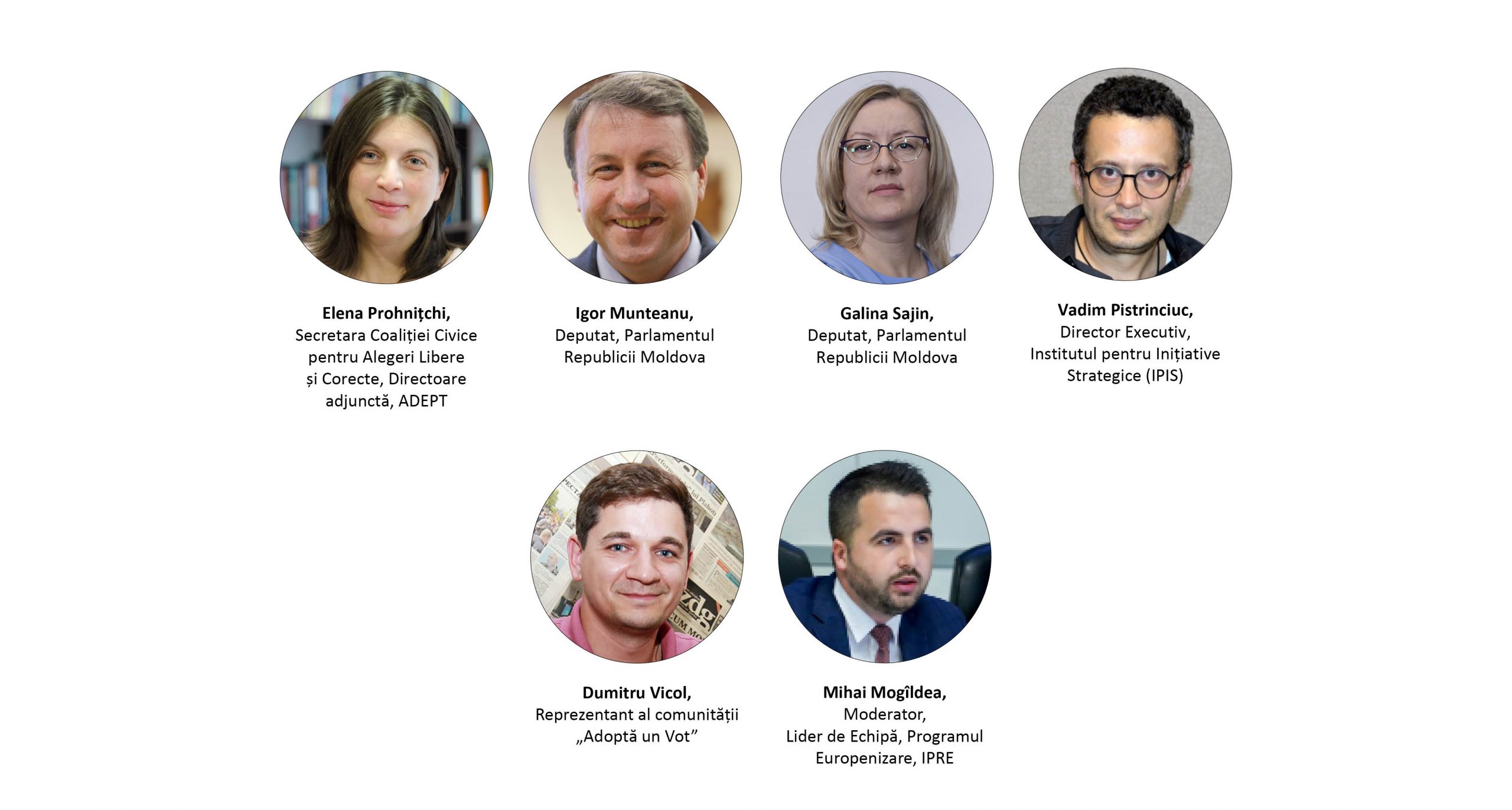 The Institute for European Policies and Reforms (IEPR), in partnership with the Community “Adopta un Vot”, Privesc.eu and the support of the Hanns Seidel Foundation, organized on Wednesday, November 25, 2020, the 11th#EUDebatesCafe online videoconference, dedicated to the identification of optimal solutions for the current challenges related to the vote of diaspora.

The guests of the event, which was hosted by Mihai Mogildea, team leader, Europeanization Program, IEPR, referred to the major challenges of organizing presidential elections abroad, based on the preliminary findings of national and international observers regarding the presidential elections of November 1 and 15, 2020. At the same time, the discussion brought up the necessity and feasibility of introducing alternative voting methods in the following national elections.

Some of the main interventions of the speakers can be found below.

Igor Munteanu, MP, Parliament of the Republic of Moldova: „This massive participation of the diaspora in the recent presidential elections represents a true catalyser for positive and democratic changes. The participation of the 260,000 voters from the diaspora demonstrates that those who participate in electoral processes must enjoy not only ovations, but also the necessary comfort, so that they can be connected to the political process from the Republic of Moldova. The wide participation of the diaspora sends the message that urgent measures must be taken. First, we need to modernize the electoral system. Secondly, we need to gage the practices of participation in the elections. And finally, we need an alternative voting system, which means vote by mail, electronic voting etc. The mobilization of diaspora shows that the citizens living abroad do not estrange themselves from the domestic subjects and national agenda, staying extremely pervious to the national issues. Taking into consideration that 92% of the voters abroad gave their ballot for a new president, we need to understand that we have to respond to this investment in the democratic institutions, through a major reorganization of the electoral code.”

Elena Prohnițchi, Secretary of the Civic Coalition for Free and Correct Elections, Deputy Director, ADEPT: „The preliminary registration is not compulsory, but is an indicator of where the most Moldovans live, a number which the Central Electoral Commission (CEC) should consider. The registration is open the year around and closes 45 days before the election day. Regarding another criterion considered for opening polling stations abroad, we believe that the data of the Ministry of Foreign Affairs is inaccurate and far from reality. Moreover, there is no clarity regarding the frequency of updating. There is no clear mechanism on how these provisions can be applied by CEC, because the institution does not have a regulation for this purpose. Previously, the Association “Promo-LEX” submitted a proposal for a new regulation and methodology to CEC, however, no feedback was received. ADEPT took it over, applied it and came up with several proposals regarding the number of polling stations in the countries where a larger number of Moldovas is assumed to live. Afterwards, CEC accepted certain recommendations, by establishing the number of polling stations abroad based on an equal share of the three criteria. Based on this methodology and the internal discussions, a list of 202 polling stations to be opened abroad was sent for approval to the Ministry of Foreign Affairs and European Integration (MFAEI). The MFAEI had discussions with the authorities from the host countries and based on the restrictions imposed in the respective states, feedback was sent to CEC regarding the possible number of polling stations to be opened. The last note of the MFAEI referred to 145 polling stations, but after a final revision, a list of 139 polling stations was approved by CEC. The decision of CEC regarding precisely that number is unclear, while the communication between the MFAEI and CEC was less transparent.”

Galina Sajin, MP, Parliament of the Republic of Moldova: „We have been advocating for the registration of vote by mail for a while. Since I became MP, I’ve been thoroughly analysing the experience of Romania. I think that the next step in improving the situation will be to implement the vote by mail, and afterwards the electronic vote. Yes, we are convinced that this time practical steps will be made in this sense, because the previous parliaments did not show any will or political interest to support and protect the right to vote of those living abroad. The experience of the past elections and the massive participation of people demonstrated that people are not indifferent. Diaspora is open to all opportunities that would facilitate their right to vote. It is equally important for the citizens who live in zones where polling stations were never opened. I think the initiative to increase the number of ballots up to 10,000 and to organize a 2-days voting could be an efficient solution, because one without the other put a huge pressure on the electoral officials. For the next elections, the amendment of the Electoral Code is vital, in order to extend the voting possibilities.”

Vadim Pistrinciuc, Executive Director, Institute for Strategic Initiatives (ISI): „Limiting the vote of diaspora is a very serious issue and the parties which do not support the limitation must do the impossible to prevent the implementation of this limitation by law. The parties that count on the vote of diaspora, but also understand its importance in the social and economic life of the country, should not admit the limitation of the diaspora’s vote. The civil society which has the capacities of public diplomacy should explain the necessity to respect diaspora’s right to vote. Limiting the right to vote of diaspora could create a negative economic impact because Moldovan citizens living abroad plan their mobility depending on their attitude towards their country. On the contrary, we have to think of more ways to invite and attract them home, so that they can come home, spent their money here and make investments. I believe that we have to initiate round tables with the parliamentary fractions which show resistance against the diaspora, in order to discuss with them the disadvantages of the idea to going “against diaspora”. If this limitation happens, the society has to mobilize, because those at home have to right to protest, and we know that the political class is afraid of protests.”

Dumitru Vicol, Representative  of the community „Adoptă un Vot”: „On one hand, we would like to have a better communication with CEC, which can tell us in clear terms where are the polling stations. However, it is also the fault of our citizens who are not informed and have poor civic culture, a culture that we should have. Regarding the decision transparency, which is an old issue of Moldova, I did not understand what were the reasons to open 139 polling stations and not 150 or 200. It is hard to estimate the number of those who will come to vote, but when CEC is not flexible to modify the number of polling sections, this rises a lot of questions marks. On the other hand, I do not see the necessity to open more polling sections. The problem that worries me is their location, because they should be located in zones where many Moldovans live. At the moment, polling stations are opened in zones which can be reached by Moldovans in several hours, and then they must also stay in the queue.”

For more details, you can watch the video registration of the event on Privesc.eu here and on Realitatea Live here.