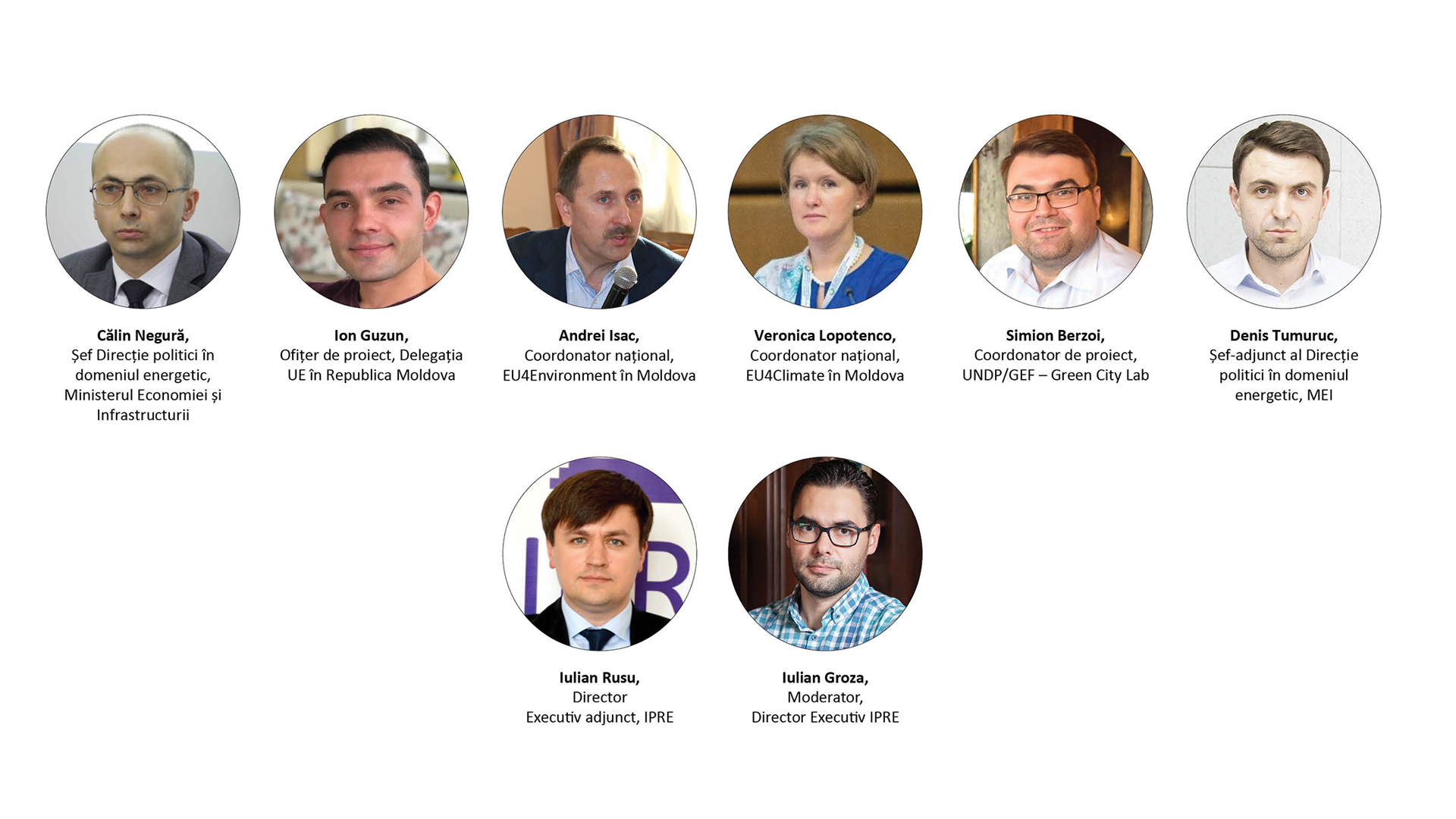 The Institute for European Policies and Reforms (IPRE), in partnership with the Ministry of Economy and Infrastructure, the EU4Environment and EU4Climate programs in Moldova, the UNDP / GEF – Green City Lab project, Privesc.EU and with the support of the Hanns Seidel Foundation, organized on Thursday, November 5, 2020, the tenth #EUDebatesCafe video conference in online format, dedicated to the promotion of green mobility and electric cars in the Republic of Moldova.

The participants at the event, moderated by Iulian Groza, Executive Director of IPRE, referred to the objectives of the European Green Deal and the reduction of the CO2 emissions by promoting green transport. The speakers discussed the national fiscal policies and measures to encourage the reduction of CO2 emissions; as well as the constraints, benefits and opportunities of promoting green mobility, namely electric cars in the Republic of Moldova.

Please find further some of the key notes of the speakers:

Ion Guzun, Project Officer, Delegation of the European Union to the Republic of Moldova: “One of the objectives of the EU Delegation to the Republic of Moldova is to encourage progress in achieving the targets for reducing greenhouse gas emissions by 2030. In this regard, the EU supports several projects, including in the area of energy efficiency, investments in sustainable heating systems, street lighting, but also technical assistance for the energy sector reform. Another very important objective is the development of an economically green infrastructure with an increased focus on green transport solutions, both locally and nationally. One recent example of EU’s support for green mobility in the field of electric transport is the purchase with EU funds of trolleybuses in Chisinau and Balti. An ongoing railway project related to the promotion of green mobility is underway. Recently, with the support of the EU and other European partners, 12 non-electric locomotives were purchased with much efficient level of fuel consumption. The rehabilitation of the Bender-Basarabeasca-Etulia-Giurgiulesti railway sector is expected. A priority focus is also given to a project to electrify the railway line in the sectors where this is possible”.

Andrei Isac, National Coordinator, EU4Environment in Moldova: “One of the short-term priorities for the EU-Moldova Association Agenda is to establish a modern, competitive and resource-efficient economy, in line with the principles of sustainable development, circular economy, reduced CO2 emissions as per the targets of the European Green Deal by integrating environmental objectives into all sectors of the economy. The EU4Environment project in Moldova, which I represent, is a fairly large project, coordinated at the regional level by two directorates and implemented by five implementing partners and with a budget of about 20 million euros. We try to achieve the objectives related to the creation of a better governance, increasing the well-being of the population and improving the quality of the environment. One of the first expected result of the programme is to ensure a “greener” decision-making process. Thus, the objective in this direction is to support the platforms of inter-ministerial political dialogues on green growth and the integration of green economy targets and other aspects of sustainability in planning processes. The second target is the circular economy and new growth opportunities, by integrating sustainable development factors and green economy principles into strategic decision-making and day-to-day business management. A final result is to ensure compliance with environmental requirements, and here we aim to support national authorities in establishing the regulatory framework and policy instruments to promote the environmental performance of large companies and SMEs and attract green investment.”

Veronica Lopotenco, National Coordinator, EU4Climate in Moldova: “The overall objective of the EU4Climate program is to reduce greenhouse gas emissions and strengthen climate resilience as provided by the policies and development plans of the six Eastern Partnership countries via strengthened and improved climate policies through legislative harmonization. The program has an overall budget of 8.8 million euros and will be implemented by 2022. The program is focused on strengthening regional cooperation and capacity building through thematic training and policy dialogues, as well as providing technical assistance at national level. One of the key results of the project is consolidating the determined national contribution established by the Paris Agreement, which was updated in March 2020. The Republic of Moldova was the fourth country in the world to take this step. Achieving a reduction in CO2 emissions in the energy and transport sectors is a key objective. Here I can mention some key actions we are focused on promoting the production of bioethanol; promoting energy efficiency in rail transport; tire labeling; efficient energy transport purchases; optimizing transport on central streets in localities. These measures can significantly reduce greenhouse gas emissions and improve the environment. “

Simion Berzoi, Project Coordinator, UNDP / GEF – Green City Lab: “At the moment, through our project, we have managed to install 30 electric chargers in the country, and by the end of the year another 60 stations with the capacity of 22 kW and 3 fast charging stations. All located in over 40 locations in the country. At the same time, we managed to support the creation of the first charging station for electric cars powered by solar energy. If we talk about the battery life of an electric car, then it is from 12 to 15 years, for newer generations the battery life has improved. If a battery can no longer be used for an electric car, it can be used to store energy. Thus, its service life can be extended up to 25 years. Then this battery needs to be recycled. “

Denis Tumuruc, Deputy Head of the Energy Policy Department, Ministry of Economy and Infrastructure of the Republic of Moldova: “Today there are several fiscal facilities offered by the state for owners of electric cars such as excise exemptions. Thus, any person who wants to buy such a new electric car benefits from the start from an exemption between 1000 and 3000 euros. Currently, the electric cars do not pay excise duties. The buyers of plug-in hybrid car pay 50% and classic hybrid vehicles pay 25%. To support “green” energy, in 2016 was adopted and since 2018 a new law on promoting the use of energy from renewable resources started to be implemented. The support schemes provided by the law are in force from this year. Thus, there is the obligation of NAER to approve certain “green” tariffs for all the capacities of renewable installations that the Government has proposed to support until 2020. Government allocates capacity for wind and photovoltaic installations offering them “green” rates. For small investors, the companies submit a request to NAER and obtain the status of “green company” provided that certain criteria are met. For larger investors, there is an obligation for them to participate in auctions. The mechanism is working, and, in the future, the Ministry intends to allocate additional quotas for wind and photovoltaic installations to meet the demands of the private sector”.

Iulian Rusu, Deputy Executive Director, IPRE: “New electric cars can exceed 30 thousand euros, a limit over which increased excise duties are imposed on imports, for the “luxury cars”. In order to encourage the purchase of electric cars, the authorities need to review this ceiling. Another measure would be the granting subsidies/repayments by the state for electric car buyers. For example, in Romania, over 10 thousand euros are offered for the purchase of an electric car. Local solutions can be implemented, such as free or preferential parking, the right to drive on dedicated lanes. Another advantage current advantage for the owners of electric cars is the non-application of the road taxes, which is not exactly correct because they also use the roads. However, one of the key challenges of an electric car owner is the battery life. But as long as the recommendations are followed, the service life can be long. The advantage of an electric car lies in the relatively low maintenance costs”.