The Institute for European Policies and Reforms (IPRE), in cooperation and with the support of Hanns Seidel Foundation, organized on Wednesday, 2nd of October 2019, the National Conference “EU’s Permanent Structured Cooperation in the areas of security and defense: implications and opportunities for Moldova”.

The event was attended by national and international experts, diplomats and officials, as well as representatives of the civil society and media in the Republic of Moldova. It offered a platform for discussing the recent developments with regard to EU’s Permanent Structured Cooperation in the areas of security and defense.

Given the nomination of the new College of Commissioners, the consequences of Brexit and the structure of the EU budget for 2021 – 2027, the conference aimed to analyse the challenges and opportunities which may influence the evolution of PESCO on short and medium term. Moreover, during the debates, there were discussed mechanisms through which the Republic of Moldova could extend its participation in civil and military missions managed under the EU mandate, but also in the 34 projects initiated under the aegis of PESCO.

The conference was opened and moderated by Iulian Groza, Executive Director of IPRE, who stated: “The EU’s structured cooperation mechanism in the field of security and defense is a new initiative that could strengthen the level of cooperation between the member states. This mechanism is in the process of being set up, but already at this stage, it provides the opportunity of participation for the third countries, which are not members of the EU. The purpose of the Conference is to discuss how this mechanism is designed, what opportunities exist for our country, but also what are the problems and difficulties that Europe faces in this area.”

In her intervention, Tatiana Molcean, State Secretary, Ministry of Foreign Affairs and European Integration, reviewed the current state of the RM-EU dialogue in the field of security and defense and underlined the importance to further develop this dimension. In this regard, the Moldovan diplomat mentioned that Moldova has to increase its cooperation with EU in a few working areas: resielience-building, cyber security and strategic communication. The launch of a structured dialogue with the EU in the field of security and defense was mentioned as one of the government’s priorities.

“On the one hand, security is indivisible, and on the other hand, we all face the same set of challenges, risks and threats, which, I believe, we must counter together. And this objective can only be achieved through strategic cooperation, both within the EU Member States and by engaging them in dialogue with the partners from the Eastern Partnership. They represent the first targets, because beyond common challenges, we also have a common geography, and the Republic of Moldova is positioned exactly at the center of this definition. I think you will agree that in the Republic of Moldova there is a whole set of challenges, both internal and external, which are reflected as well in the EU member states. Here we refer to hybrid threats, propaganda, various crises in the region, we refer to a conflict that is still unresolved. All these issues must be viewed as a unitary whole that needs to be resolved. EU member states, such as Romania, can not look at these things separately from other developments. I would see, for Moldova, an added value, direct and immediate – the cooperation with the EU on the civil protection line, for example, but also the development of tools that exist at the European level and which would help face the internal challenges. Another idea would be to participate jointly, on a case-by-case basis, in missions, either civil or military, to ensure the peace and stability in the world” commented His Excellency Daniel Ioniță, Ambassador of Romania to the Republic of Moldova.

The event was attended by a special guest, Dr. Ekart D. Stratenschulte, Honorary Professor at the Free University of Berlin, who referred to the current processes taking place in the EU in the field of security and defense, mentioning: “The objective of PESCO is to strengthen cooperation in the field of security and defense of the European Union from a political and military point of view. This mechanism is new and is in its infancy, intended primarily for the European Union and less for third countries.”

The Conference was organized within the project „EU Debates Cafe: Advancing the Knowledge and Expertise about EU’s Institutions and Policies in Moldova”, implemented by the Institute for European Policies and Reforms (IPRE), in cooperation and with the support of Hanns Seidel Foundation. 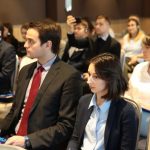