Home - IPRE in the Media - 20 Deliverables for 2020: moderate progress in the Republic of Moldova /// Newsletter, December 2018. Foreign Policy Association 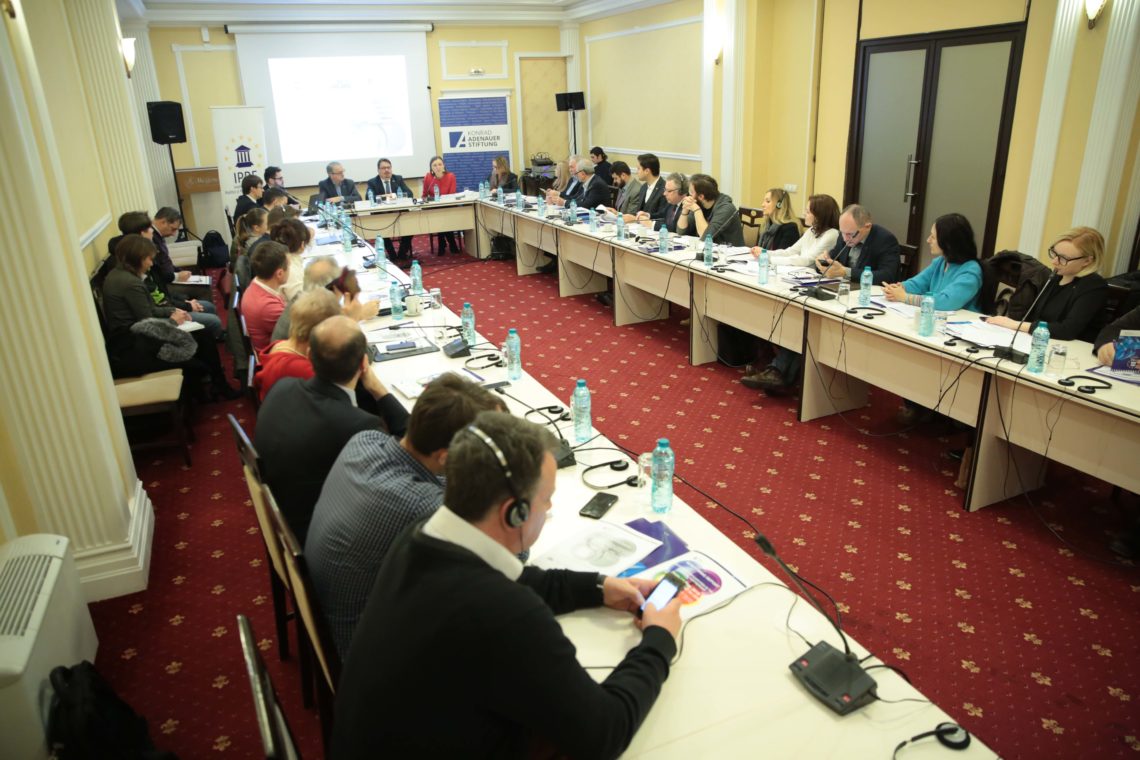 Moderate economic progress due to a substantial increase in exports to the EU, as well as in the consolidation of democratic institutions and good governance, the most vulnerable being the justice reform. Mass media affected by the concentration of ownership, cartels on the advertising market, external propaganda and internal disinformation, and an increasingly smaller space for cooperation between authorities and civil society. These are only a few conclusions of the Moldova’s Participation in the Eastern Partnership Report- 20 Deliverables for 2020, an additional tool aimed at promoting the achievement of key priorities of the member states and reaching tangible results by the year 2020. To this end, the European Commission has identified five priority areas: Cross-cutting deliverables; Economic development and market opportunities; Strengthening institutions and good governance; Connectivity, Energy efficiency, Environment and Climate change; Mobility and People- to- People Contacts. In addition to the description of the state of play, the Report developed by Iulian Groza and Iulian Rusu- experts with the Institute for European Policies and Reforms (IPRE) in Chisinau- contains a set of priorities for the year 2019. We also are providing you with a summary of the Report. See the full version of the report at https://ipre.md/2018/12/20/raport-de-monitorizare-participarea-republicii-moldova-i%cc%82n-cadrul-parteneriatului-estic-bilant%cc%a6ul-anului-2018-20-de-livrabile-pae-ca%cc%86tre-anul-2020/?lang=en.

Cross-cutting deliverables. The actions set for the cross-cutting areas registered generally an “on track” performance, with the gender equality and non-discrimination as well as media plurality and independence. The structural engagement with civil society has however registered only moderate progress. Although an important shift may be seen with respect to the support of the civil society in become more resilient, the communication with the public institutions has been at times difficult. Initiatives to restrict or control the activities of civil society representatives, including via last-minute legislative initiatives, have only worsened the relations between the public institutions and the civil society representatives.

Economic development and market opportunities. Actions to support to SMEs and trade & DCFTA implementation were assessed as “on track”. Key deliverables of the two sectors of intervention are an increased number of SMEs who are supported with funding and capacity building to boost their business opportunities as well as promising trade figures of the country generally (close to 70% of Moldovan exports directed to the EU in 2018), with new chapters of exports (equipment and machinery) having a lead record a 2-year period (26% out of the total share of exports in 2018).

The actions related to access to finance and job creation and local and regional level have registered a “moderate progress”. Access to finance is still not sufficiently vibrant, particularly for start-ups and SMEs, although actions were taken both to “clean” the banking system after the 2016, with EBRD acting as an important shareholder in two of the three commercial banks under “special supervision” from the National Central Bank and a new entrant from Romania (Banca Transilvania). The FDI did not reach yet the record USD 200 million registered back in 2014, although there have been both policy and implementing measures taken in 2016-2018 to improve the business climate in Moldova. Job creation at local and regional level has not registered sufficient pace. These outcomes are possible with strong local public authorities, which currently face excessive fragmentation, reduced population and very little own revenues and local capacities. Increased productivity of created jobs is possible with smart specialization, which has not yet taken place. At local level production is mostly in the hands of large producers who generate low-competitive products, mostly raw materials and not final products for consumption.

Strengthening institutions and good governance. The implementation of key judicial reforms as well as the rule of law and anticorruption mechanisms have registered a “moderate progress”. These two sectors, crucial to guarantee attractiveness for business and fairness to citizens suffers from insufficient results. Actions were taken at policy level to improve the process of self-management of the judges’ and prosecutors’ bodies. The process of appointment of judges and prosecutors is still questioned in terms of fairness and merit-based promotion. Alternative evaluations show that the process of appointment of judges and prosecutors at times does not involve a merit-based approach and that there are still inconsistencies with respect to the way the results of the candidates are marked. The investigations initiated against judges and prosecutors, including those involved in high-profile baking fraud and Russian laundromat cases, are still not finalized.

The rule of law and anticorruption institutional framework registered important developments, with the creation of the National Integrity Authority (NIA), the Anticorruption Prosecutors’ Office (APO), the Asset Recovery Office (ARO), the Financial Intelligence Unit (FIU), as well as approval of important anti-money laundering and illegal asset recovery legislation. At implementation level, important constraints may still be found. The NIA started to be operational only in 2018 and the review of the assets declarations and conflict of interest are mostly confined to sanctioning local and rayon level councilors. High-level public officials have not been subject to detailed assets reviews and investigations.

Connectivity, Energy Efficiency, Environment. The Extension of the TEN-T core networks, Energy Supply, Energy Efficiency and Environment have all registered an assessment of “on track”. Actions were taken in all four priority sub-areas with important implications in the upcoming years. The Connectivity sector ensured progress in connecting to the TEN- T, recent decision from Romania was taken to build a new A8 motorway which will connect Moldova to the EU motorway network. Investment projects in infrastructure have been negotiated and initiated with the World Bank. Since 2012 Moldova is part of the Common Aviation Area (CAA).

Moldova transposed most of the 3rd Energy Package legislation. Gas connections between Moldova and Ukraine were approved, work on the interconnection Ungheni-Chisinau commenced and Romanian investment into the gas supply sector attracted. Electricity interconnections initiated with both Romania and Ukraine with an estimated completion of the projects in 2020

Moldova committed to reduce CO2 emissions, approved national legislation and strategic planning documents to promote renewable energy and increase efficiency of use of energy resources. Sector legislation was approved to promote the greening of the businesses, primarily of the SMEs. Specific legislation was promoted to prohibit export of timber. The Emerald Network sites in Moldova have increased with one unit (36 to 37) from 2016 to 2017.

Mobility and People- to-People Contacts. After more than 4 years of Visa free regime with the EU Moldova registered insignificant rates of refusal of 0,3% and of illegal stay of 0,5%. The EU evaluated the progress on the Visa free dialogue as “on track”, however underlined the important of implementing the anticorruption and anti-money laundering legislation. Cooperation was fruitful with EU agencies and over 100 projects on EU-Mobility Partnership have been implemented.

Dual education and VET have been supported by the EU and by GIZ. Since 2015 dual training is implemented in the Moldovan businesses based on the German practice. In 2018 the Government institutionalized the dual technical professional training. Unemployment rates among youth are still rather high. Moldova is part of the Creative Europe Network (CEN) since 2015 but did not use much of the resources to benefit from membership. A moderate participation of Moldovan researches was identified within the Marie Sklodowska-Curie Actions (MSCA).

The participation of Moldovan Universities and research institutes within the research and innovation initiatives of the EU was moderate, although Moldova was the first of the EaP countries to become a full associated member of the EU Program Horizon 2020. In 2018 Moldovan organizations participated in 48 Horizon 2020 projects. The Moldovan National Research and Education Network was connected in 2018 to the GEANT Connectivity map. In October 2018 Moldova hosted the 3rd EaP E-infrastructure Conference EaPEC 2018.