Home - Press Releases - The Citizens will learn more about the provisions of the Association Agreement and the process of its accomplishment, within a project of IPRE

The Citizens will learn more about the provisions of the Association Agreement and the process of its accomplishment, within a project of IPRE The experts from the Institute for European Politics and Reform (IPRE ) will communicate more information to the citizens about the provisions of the Eropean Union Association. IPRE will monitor the implementation of the Agreement, in a project supported by Slovak Aid – Official Development Assistance of the Slovak Republic.

“We believe that the only way to the stability and prosperity of the population in the Republic of Moldova is the integration into the European Union. The project has the ambition to contribute to the successful implementation of the Association Agreement with the EU”, said Slovakia’s Ambassador to the Republic of Moldova, Mr. Róbert Kirnág, at the launch event, held in Chisinau today.

The head of the EU Delegation in the Republic of Moldova, Pirkka Tapiola, stressed the importance of fulfilling our country commitments under the Association Agreement. “By bringing Moldova closer to the EU – I mean the citizens here to have a better life and to have better possibilities. This establishes duties and responsibilities of reforms in various fields. We have some challenges ahead of us: the justice sector – the mother of all reforms. We see that people do not get justice in the court system – this should be changed. A second challenge is the financial sector. The banking sector does not have good results. The third challenge is the competition. We want strong application of the competition law: transport, aviation, energy. The fourth challenge concerns the reform of the sanitary and phytosanitary system. Once ​​these reforms are made, the citizens will have more and better opportunities. The European Union can only help”, said the EU Ambassador. IPRE experts stated that they will explain within the project where exactly is Moldova as far as the achievement of the Association Agreement concerns, they will identify the problems of our country and, based on these assessments, will come up with recommendations to advance the Association Agreement implementation process in the next two or three years. “We would be very glad if such initiatives of the civil society, aiming to produce very objective visions based on a clear methodology of what actually happens in the Republic of Moldova and producing results based on which both the EU ant the IMF, as well as any other international institution were able to ask for much more in terms of development and reforms in Moldova. I think this would be advantageous. You should know that in the person of IPRE you have a trusted partner and friend of truly European reforms in the Republic of Moldova”, said the Executive Director of IPRE, Victor Lutenco.

The Project Coordinator, Iulian Groza, the moderator of IPRE on European integration, said that the aim of the project is to contribute to increasing the knowledge level regarding the importance of the Association Agreement for the European future of our country. “We will try to be active, to coagulate the voice of the civil society, to involve both the citizens and the local authorities in the implementation of the Agreement”, said Iulian Groza. Also, within the event, the Preliminary report “A year from the beginning of the provisional implementation of the EU-RM Association Agreement: What has the Republic of Moldova managed in this period?” was presented. It analyzed the key results obtained by the Moldovan authorities as well as the arrears or the missed opportunities in its accomplishment. The authors have also highlighted some main internal and external factors that influenced the dynamics of the process of implementing the agenda of reforms in the Republic of Moldova.

In the very next period, the IPRE  will closely monitor the quantitative and qualitative progress made ​​by Moldova in the fulfillment of the key areas covered by the Agreement, including judicial reform, fighting corruption, banking sector, agriculture and rural development, competition, energy, etc..

Also, within this event, the associated expert on European integration policies Iulian Rusu, presented the first thematic review on the implementation of the commitments of the Republic of Moldova in relation to the European Union regarding the competition law. “Competition requires consolidated effort, especially in respect to the effective implementation of the competition law, a more active role of the Competition Council to sanction anti-competitive behavior of the monopolistic enterprises or those organized in cartels, as well as a clear agenda to permit the achievement of the commitments related to the monitoring, authorization and recovering of the illegal state aid granted by the public authorities”, said Iulian Rusu.The project “Monitoring the Implementation of the EU-RM Association Agreement” will be implemented by February 2016, and has a budget of about 50 thousand Euros. Representatives of the civil society, the national public authorities and diplomatic missions accredited in the Republic of Moldova, as well as the press attended the launch conference.

Follow this link to see all the declarations from the launch event. 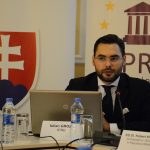 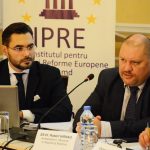 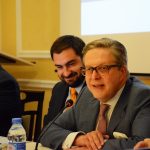 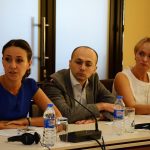 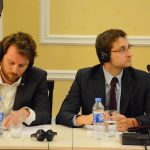