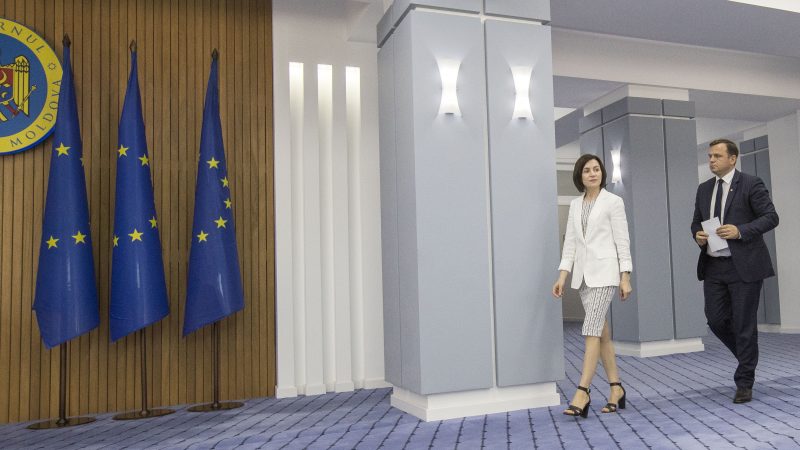 Although the new coalition comes with risks, Moldova is now in a unique position to restore its democratic track record and recommit to its path of pro-European reforms, write Cristina Gherasimov and Iulian Groza.

Cristina Gherasimov is a research fellow at the German Council of Foreign Relations (DGAP) and Iulian Groza is the executive director of the Institute for European Policies and Reforms (IPRE) from Chișinău and former deputy minister of foreign affairs and European integration of Moldova.

Moldova is now in a unique position to restore its democratic track record and recommit to its path of pro-European reforms. Looking back at lessons learnt from the crisis is an important first step forward.

The ‘sandwich effect’ of pressure

The combined international and domestic pressure made the outgoing government cede power peacefully. The secretary-general of the Council of Europe, the EU, US and other members of the international community issued a series of statements supporting the legitimacy of the new Maia Sandu’s Government.

Most international actors also called for restrain, calm and dialogue among all political forces to ensure a peaceful transfer of power from a regime that has captured all state institutions and had no exit strategy prepared.

The new Minister for Foreign Affairs and European Integration Nicu Popescu, paid several high-level visits to France and the US to secure the support of the international community.

The judiciary and prosecution are key institutions that await reform. The Constitutional Court revised and cancelled its controversial rulings from 7-9 June which initiated the crisis only after the outgoing government pushed back and announced their capitulation.

Basing its decisions on “factual circumstances” rather than on the Constitution seriously affected the credibility of the Constitutional Court. Prime Minister Sandu calls for the resignation of the judges who created the standoff on politically motivated decisions.

The EU, the US, the European Parliament, and the Council of Europe have criticized harshly the Moldovan courts in the past years. In 2018, the EU suspended its financial assistance precisely for the deterioration of the rule of law and democracy, and for the politicization of the courts.

The government that was formed on 8 June brings together two diametrically opposed political parties. The pro-Russian Socialists informally led by President Dodon, and the ACUM bloc formed of two strongly pro-European parties, Action and Solidarity Party led by Maia Sandu, and Dignity and Truth Platform Party led by Andrei Nastase, are more different than similar ideologically and in terms of their geopolitical aspirations.

Therefore, experts predicted a coalition between Democrats and Socialists or snap elections at best after the 24 February elections produced a hung parliament. Against all odds, ACUM and Socialists struck a last-minute alliance which left the ruling Democrats in opposition. This unexpected coalition should be taken as an act of political maturity on behalf of the two parties.

This coalition comes with risks. It is a temporary alliance against the Plahotniuc regime. It is unclear how long it will last but experts give it less than twelve months. This is a critical period for the two parties to find more common ground and policy areas they can work on together.

It is key they leave their differences aside since an oligarchic regime proves to be easier created than dismantled.

A window of opportunity

Moldova has now a new window of opportunity to resume the country’s Europeanisation process. Both the EU and Moldova should not repeat previous mistakes again. EU strict conditionality needs to be applied by targeting narrow systemic problems with specific measures.

The old elites are still part of the system. The Democratic Party will fight back and the new government coalition needs the support of the EU to cleanse its institutions. In a recent statement on 15 June, the Commissioner for European Neighborhood Policy and Enlargement Negotiations Johannes Hahn highlighted the EU’s readiness to work with the new Sandu government.

Rapid support and advice could be mobilised as soon as conditions are met.

Following the Foreign Affairs Council meeting on Monday, where the EU has reiterated the readiness to work with a reform-committed government, on the basis of the EU-Moldova Association Agreement, already on Wednesday, 19 June, Commissioner Hahn is paying a visit to Chisinau to discuss with the new government the resumption of the EU macro-financial assistance.

This window of opportunity is narrow and needs to be used before Brussels enters the process of transition to a new European Commission which is planned to take office on 1 November.